Larry Wachowski and brother Andy, of Polish descent, were raised in Chicago. They both dropped out of college and ran a construction business, while creating comic books for Marvel and Epic. In 1993 Larry married his childhood sweetheart.

The Wachowskis' entry into Hollywood was with the script for Assassins, 1995, however their script was 'totally rewritten' by Brian Helgeland and they unsuccessfully attempted to have their name removed from the film.

They wrote, directed and produced Bound, 1996. In the development of the film the male lead was rethought, with the advice of Susie Sexpert, and became a female butch, and the female lead character changes during the film from a femme bimbo to a leather dyke.

In 1999 the Wachowskis took Hollywood by storm with the first Matrix film in 1999. Like the two sequels, The Matrix features several digital gender morphings. With earnings from the film, Larry and his wife bought a $1.9 million house in Venice, California, and the brothers moved their production company into a nearby building.

Ilsa was flown to Australia, first class, where the two subsequent Matrix films were being made, and it was Lana rather than Larry who picked her up at the airport. Larry was struggling with the idea of being transgender, and how to tell their parents. Sometimes he did not sleep for days. After a phone call in which it was apparent that something was wrong, the Wachowskis' mother flew to Australia the next day. The morning after, Larry blurted out: “I’m transgender. I’m a girl". The father arrived a few days later, and accepted their eldest child as Lana, to the extent of going out with her. Shortly afterwards Lana was also on the film set.

However communication with the public on the topic was cut off. It was Larry who appeared with Ilsa at the LA premiere of Matrix Reloaded in 2003, and then again at the Cannes Film Festival. Larry looked different, androgynous, and it was supposed that he was taking female hormones. He and Ilsa moved into a $2.7 million home in San Francisco's Castro area. Later that year the Wachowskis had to attend a Screen Actors Guild arbitration hearing where Marcus Chong, who played Tank in the first Matrix film, claimed that he had been unfairly treated. Again it was noticed that Larry's appearance had changed.

Rumors without confirmation continued as to where Lana was within the transgender options. Sources close to the Wachowskis denied the rumors. One employee on the Speed Racer film pointed out to Fox News that: "on the call sheets, it still says Larry", although it is rumored that she had transgender surgery soon after that film wrapped. 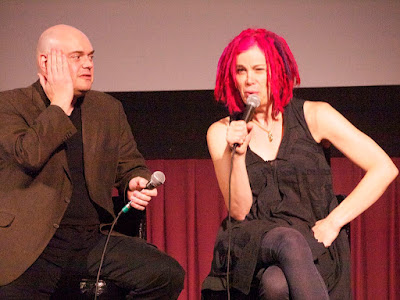 Karin and Lana married in 2009. It was not until 2012 that Lana emerged for a press conference to discuss their new film Cloud Atlas, which featured its major actors in a variety of roles including some cross racial and some cross gendered.

Later that year she was awarded the Human Rights Campaign Visibility Award and gave a well-received acceptance speech in which she discussed being trans.

++In March 2016, it was announced in the press that Andy also had started transition, using the name Lilly.
EN.WIKIPEDIA      IMDB

Both IMDB and Wikipedia do not seem to like Ilsa Strix.   IMDB lists her as in only one film (she was in at least 6 or 7)  and lists only her marriage to Buck Angle.  On the Lana Wachowshi page it lists Larry's first marriage, but not that of Lana and Ilsa.

Ilsa had a Wikipedia page but it was taken down in May 2010 for a given reason of  "Non-notable person. Being romantically involved with a notable person does not confer notability".   The text can be read in Wikibin.   She would certainly seem to be at least as notable as the others persons in the Wikipedia category on Dominatrices.