Kristjánsson was educated as a Marine Engine Officer and worked as a Control Room Engineer at the Reykjavik Energy Co. Scania for a year. Kristjánsson married and they had three children. They were divorced in 1982.

Kristjánsson had been gender dysphoric since childhood, but even by the 1980s there was no support of any kind anywhere in Iceland. Kristjánsson relocated to Sweden and found a job with Stockholm Energi (now Fortum AB), and joined the Swedish Transsexual Society. This led to a doctor in Uppsala in 1992, and as Anna Kristjánsdóttir she had transgender surgery in 1995.

She moved back to Iceland in 1996 and found it very difficult to get a job, although eventually she obtained a position at Reykjavík Energy. She was the only known transsexual in the country at that time. She estimates that there are around 50 by now. 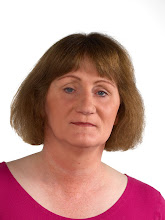 “I believe that gay legislation in 1996 played a big role in changing points of view for our community as well. In 2007, we founded the society Trans-Iceland, which was part of getting more acceptance from the outside. Around 2005/2006 attitudes really seemed to change, partly because more people came out. The healthcare system adopted a much more positive stance on transgender issues, which made it much easier for us.”

In 2012 the Althing passed a supportive law requiring the National University Hospital of Iceland (Landspítali) to have a department for transgender diagnosis and surgery, and legal changes, all without a requirement for surgery.

I take it that we all understand Icelandic surnames which are usually the father's first name with a suffix or either 'son' or 'dóttir' depending on gender.
Time: 08:17