Kaldera has congenital adrenal hyperplasia. Kaldera was introduced to Wicca by a boyfriend at age 14, and wandered through various pagan and earth-centered traditions including Dianic and Umbanda.

Despite being masculine, Kaldera became a wife and the mother of a daughter, and was planning to be a science fiction writer and a folk musician, until a near-death experience while battling with lupus.


"During this drawn-out illness, I had a massive vision of the goddess who had been involved with me throughout my life.”

She revealed herself as Hela, the Norse goddess of death.

Hela told Kaldera to become a man, an option he had already been considering. He took testosterone and had chest surgery.


“It was a gamble, it was a leap in the dark, but it was absolutely wonderful. For me it was sacred shape-shifting. OK, socially it’s been very difficult, but y’know, it’s hard to be a minority. The irony was that I went through my second puberty at 30, around the same time my daughter went through normal puberty.”

Later the god Baphomet arrived and talked to Kaldera.


"The reason that he, or she, liked me is that he’s a hermaphroditic god. He can shift back and forth, but he’s always mixed. I’ve lent him my body. In Afro-Caribbean terms, I’m a ‘horse’, in that I will lend my body consensually to god-possession under certain circumstances or rituals. He makes sure, while he’s using my body, to leave me a lesson of some kind.” 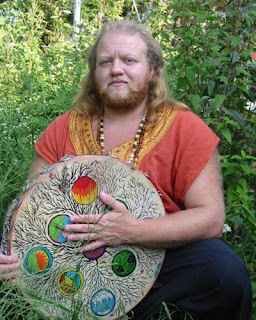 He is the leader or king of the Neo-Pagan First Kingdom Church of Asphodel. His wife of 13 years is Bella, a trans women. They own and run Cauldron Farm, a pagan homestead in Hubbardston in rural Massachusetts, where they live with his daughter, who still calls him 'Mum'.

Much of what he has written is controversial and is rejected by other neo-pagan groups, particularly the emphasis on ordeal, the fact that he has a boyfriend-slave, and is into domination that features pain and violence. He has written 33 books.
CauldronFarm   PaganBDSM   RavenKaldera   KingdomofAsphodel   NAFPS   RunatyrKindred    LGBTran    WorldCat    Amazon
Time: 09:41