Donal Mark Foy, did a degree in Dentistry at University College Dublin, 1971, and set up a practice in Athy, Co. Kildare. Foy married a woman in 1977 and fathered two daughters.

As Lydia, she transitioned with surgery in Brighton, UK in 1992, after a judicial separation. The Irish Health Board System contributed £3,000. In 1994 she lost access to her children by order of the Circuit Court.

While her driving licence, and UK and Irish passports give her gender as female, her birth certificate still said male. In 1997 she began an action in a High Court contending that the Births and Deaths Registration (Ireland) Act 1863 did not justify the practice of using solely biological indicators existing at the time of birth to determine sex for the purposes of registration. The case came to court in 2000. Mrs Foy and the daughters contested the plea claiming that it could have "an adverse effect on their succession and other rights". Judgement was reserved for two years: Dr Foy’s claim was rejected due to the lack of Irish or UK legislation that would facilitate the overturning of the existing jurisprudence. Justice McKechnie called on the Government and Oireachtas to deal with the position of transgender people as a matter of urgency:


“Could I adopt what has repeatedly been said by the European Court of Human Rights and urge the appropriate authorities to urgently review this matter”.

Two days later, 11 July 2002 the European Court of Human Rights found in favour of Christine Goodwin's case to have a correct birth certificate (Christine Goodwin v. UK) and awarded costs and expenses of £14,685: “the unsatisfactory situation in which post-operative transsexuals live in an intermediate zone as not quite one gender or the other is no longer sustainable”. 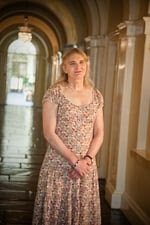 The State appealed this ruling to the Supreme Court. In May 2010 the Government set up an Advisory group “to advise the Minister for Social Protection on the legislation required to provide for legal recognition by the State of the acquired gender of transsexuals”, and a month later withdrew its appeal to the Supreme Court. In 2011 the Advisory published its recommendations for gender recognition legislation. And then nothing.

In February 2013, Foy and others announced that they were returning to court to take the Government to task for inaction.

++In October 2014, the Government finally agreed to recognize her gender and awarded her  €50,000 in compensation.
EN.WIKIPEDIA      TENI