19-year-old De Ville first met transsexuals in a Montréal gay bar. They were dressed as men but had obviously started on hormones. This led to a discovery of the bars that catered to transvestites and transsexuals: PJ's for English speakers and Café Cléopâtre further east for French speakers.

De Ville completed education in 1979 with a diploma from the CEGEP St Laurent in Sciences humaines.

Michelle was often found in Montréal's bars and nightclubs. Many times she was given a hard time in gay bars, or ejected, for being too feminine. She was much more accepted in disco and then New Wave clubs through the 1980s. She got to know a club owner, and became first a waitress, and then a 'door-bitch' deciding who got into the club. She did drag shows at PJ's and Cléopâtre's, starting with an impersonation of Brigitte Bardot.

This led to some small parts in movies shot in Montréal. The most significant were Or D'ur, Amour impossible and Evixion, each directed by Bashar Shbib. For Amour impossible, she introduced the film at gay film festivals across Canada and in New York. She was also in The Surrogate, 1984, a mainstream Canadian film where the major trans role went to professional impersonator Jim Bailey.

In 1989 she was working with Comité Sida Aide Montréal, but was concerned in that HIV+ trans women were being referred to by male pronouns.  Although not HIV+ herself,  she started a group specifically for HIV+ trans women.


"In my book, the trans community should be within the gay community, we should be a whole, that's what we say about LGBT rights. We're supposed to stick together, but the reality is totally different."


In 1990 she was interviewed in Fuzzbox magazine on how queens/ transsexuals had not been allowed in some gay bars even those with a drag show. 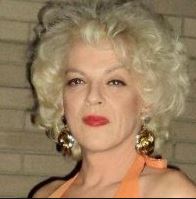 In 1994 Michelle was gratuitously insulted by two police officers. She made an official complaint, handicapped by the fact that the officers had hidden their name tags, which resulted in her being hassled by police for six days until she was stopped with her lawyer in the passenger seat. When the case finally came to court, a year later, the police insisted that there was no way to know which police officers were in which car.

Michelle makes a living selling and renting period clothing, and also books and records.
*not the Hollywood special effects person, nor the French film director

There is a pattern whereby academics who write about trans people have a favourite person whom they mention again and again.   For Vern Bullough it was Virginia Prince.   For Richard Ekins it was Phaedra Kelly.   And for Viviane Namaste it is Michelle De Ville.

Namaste 1996, 2000, 2005 returned and returned to the 1990 Fuzzbox interview where Michelle spoke of herself and others being hassled as trans women in gay bars.   This is hardly straighforward.   Are trans women a type of women or a type of gay or both?  Should trans women want to go where cis women are not allowed?  I, also, in the 1970s and 1980s, when I was less confident of passing, would go to gay bars in Toronto where it did not matter if I were read.  Fortunately, I never had such bad experiences as Michelle talks about.  The fact that the same bars that did not welcome women (trans or cis) also had drag shows is not very germane as a trans issue.   Women who go into bars offering striptease or pole dancing are unlikely to be treated the same as the male customers.  The issue is more a feminist one of what attitude to take to men in gender segregation where women`s bodies and images are commodified.

The section on Michelle's films in the 2014 interview needed some fact checking.   Namaste spelt  Evixion as Eviction, and Michelle named The Surrogate as Blind Rage (presumably a working title, but not the release title).

You may care to browse Michelle`s Amazon Reviews.   Her dismissal of Benjamin`s Transsexual Phenomon as 'dinosaur' and 'dangerous' and her dismissal of the film Different for Girls as 'both irresponsible and offensive' sets her apart.   She is also a big fan of Jayne Mansfield.