In 1936 Marlene Dietrich was in Paris for the opening of a new Maurice Chevalier musical at the Casino de Paris. Erich Maria Remarque, an ex-beau of Dietrich, also came to the show and the reception afterwards. His date for the evening was a 20-year-old woman, Frédérique Baule (born Suzanne Baulé). But it was Dietrich that Baule left with. 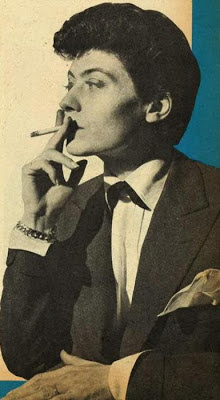 Frédé, as she preferred to be known, spent much of the next few years with Marlene who kept returning to Paris as often as her Hollywood career would allow.

In 1938 Marlene set Frédé up in business with a nightclub that was officially called La Silhouette (after Marlene's favourite bar in Berlin), but was generally known as Chez Frédé. It catered to lesbians and cross-dressing women, but also to celebrities.

Frédé's dress and haircut became quite masculine. Errol Flynn describes her in his autobiography:

"She dressed better than any man I had ever seen. … her over-all effect that of a sophisticated English schoolboy. Her man's haircut looked better on her than on any man."

Apparently La Silhouette was able to stay open during the German occupation. The club did so well that in the late 1940s Frédé moved to a larger place, Carroll's. Marlene, of course, was present for the opening, and also Erich Maria Remarque and Maurice Chevalier.
Time: 17:16