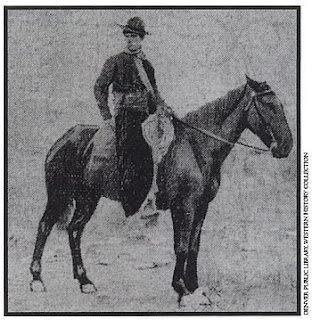 Joe Monahan arrived in Owyhee County, Idaho Territory in the early 1867. He tried mining, than worked in a mill, and then tried farming, selling produce in Silver City. Around 1800, he moved across the line into Oregon and worked with horses. Later he moved back to Idaho, and built a small ranch where he herded horses and cattle. He always made a point to vote, and served on juries, but avoided most social interaction.

In January 1904, he succumbed to pneumonia while driving his herd to winter pasture. While being laid out for burial he was discovered to be female-bodied. The neighbors were unsure what to do, and Monahan was buried perfunctorily, with neither a prayer, nor a reading.

As Monahan had been known to receive mail from Buffalo, New York, a neighbor wrote to the police chief there, who passed the letter on the local paper which printed it in the front page. In response one Katherine Walter stepped forward claiming that she had been foster mother to Joanna Monahan for six years, because of the child's stepfather being a habitual drunkard. Joanna had headed west just after turning 14 hoping to to do well. Katherine and her daughter Anna had kept up correspondence with Monahan, last receiving a letter a few days prior to Christmas 1903. In another letter to the merchant who had taken charge of Monahan's estate, Walter explained that Johanna's mother had dressed her in boys' clothes and let her earn a living running errands and selling newspapers.

However this was not enough and the newspaper accounts of Monahan grew. In March 1904 the American Journal Examiner dropped the 'e' and told how Jo had been deceived by a man who abandoned her and her baby. When their parents died, Jo's sister took in the baby and Jo headed west. Other papers suggested that Jo had an affair with a Chinese cook that she hired. In 1981 Barbara Lebow dramatised the story, with the baby and a disguised trip back East to see her son. The story was filmed by Maggie Greenwald in 1993, with the baby, the cook-lover and the female spelling of 'Jo'.

The film sold well with GLBT audiences and had Ian McKellen in the cast.  However it was a heterosexualization of the story, and denied that Joe was a trans man.

Peter Boag examined the 1860 Buffalo census returns but did not find a Joanna Monahan, but did find a Peter Reily, a saloon keeper living with his wife and her two children Ann and Mary Manumon (aged 8).  They also had a 13-year-old servant Johanna Burke.  It is not clear whether Joe was originally Mary or Johanna.
Time: 23:53