Magnus Hirschfeld’s two major works, Die Transvestiten and Die Homosexualität were not translated into English until 1991 and 2000 respectively.  Until then the major Hirschfeld work in English was Sexual Anomalies and Perversions: Physical and Psychological Development and Treatment: a Summary of the Works of the Late Magnus Hirschfeld, 1936, which was reprinted in 1937, 1952 and 1962.   Online.

The full title on the title page is: 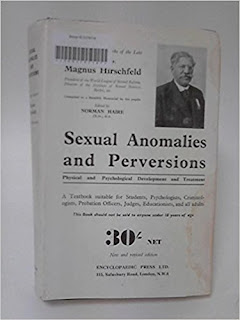 physical and psychological development and treatment.

Compiled as a humble memorial by his pupils.

The book is obviously not a simple translation as Hirschfeld is often referred to in the third person.  It seems to be a mixture of translation and précis.  However no translator is given.  No editor is given.  Nor is there any clear statement as which of Hirschfeld’s German book or books it is supposed to be a rendering of.

A Google search of  ‘ "Sexual Anomalies and Perversions" Haire’ produces thousands of returns, mainly libraries and book retailers associating the book with Norman Haire, as either editor or translator.  This is no surprise as Haire was a professional colleague of Hirschfeld, and was fluent in German.  Moreover on p387 of Charlotte Wolff’s seminal biography of Hirschfeld we find re November 1928:


“Haire wrote to Hirschfeld that he had already translated the first three chapters [of Sexology (Geschlechtskunde)]. But he expressed his surprise and anger that European Books had been told, wrongly, that the whole volume was ready for publication.  He had engaged Dr Jordan to share the translation work with him.  The lengthy and difficult task was achieved only in 1930.  Shortly after its completion, Dr Jordan, a personal friend of Haire’s, committed suicide.  The tragedy of his death, together with a different schedule of work, led to further delays.”

However Hirschfeld had promised the English version to two publishers, Julius Puttmann and Jonathan Cape.   Cape attempted to come to an understanding with Puttmann, but no deal was achieved, and the book never came out.

Which leaves us wondering what happened to the Haire-Jordan translation.  It would be sensible of Haire to reuse it as the text of Sexual Anomalies and Perversions.

To complicate the issue there is a counter narrative. Between 1934 and 1939 three books on sexuality were attributed to Dr Costler, a pen-name for Arthur Koestler, known until then as a Communist writer, who did some hack work for his publisher cousins, Willy and Ferenc Aldor.  The first book was The Encyclopœdia of Sexual Knowledge, 1934.  It contained two chapters by Ludwig Levy-Lenz, and the English edition was edited by Haire.  The second book was Sexual Anomalies and Perversions, 1936, and the third was L’Encyclopédie de la famille, 1939, which has been published in English under various titles.

This is what Koestler says about the second book in his autobiography:


“The ‘pupils’ who appear as author was I, but the English edition was considerable enlarged and revised by the editor, Norman Haire”.


“considerable enlarged and revised” – that could mean a lot or a little, but is quite compatible with the idea that large chunks of the Haire-Jordan translation were used.


“In the 1940s he [Koestler] became famous, then rich, after writing Darkness at noon so Haire, in his introduction to the 1952 edition, was rude to say ‘it was evident that the text was compiled by a foreigner’ who ‘was not completely familiar’ with English. Haire said for this reason he carefully revised the text, amended the language and punctuation where necessary, deleted some passages, inserted some, corrected some statements, and brought the text up-to-date. Koestler (1969, 271) got even by claiming: ‘I have never met Mr Haire, but I have looked him up in Who’s Who for 1946, where he occupies more space than either Winston Churchill or George Bernard Shaw. I am told that he died in 1952’. “

Neither of Hirschfeld’s two biographers, Wolff and Mancini, even mention Sexual Anomalies and Perversions.