Miguel Brau Gou was born in Barcelona. At age 12, while working as an errand boy, he would entertain with song and dance. At 16 he was an extra in several movies.

From 1956, as Miguel de Mairena, he became well-known in the Barcelona area as a singer and entertainer.  His lover was Pedrito Rica, before the latter began his tour of the Americas. Both were arrested under the Ley de Vagos y Maleantes (Vagrancy Law) which was amended by the Franco dictatorship in 1954 to include homosexuals. Miguel was badly treated in prison, and because of this was unable to work for a year as an entertainer after his release.

However by the late 1960s he was performing with other popular singers in Barcelona.

In the 1970s, as Carmen de Mairena, she had black-market silicone injections and sought work as a transformista doing impersonations of Sara Montiel and Marujita Diaz. This was not well received and she resorted to sex work. 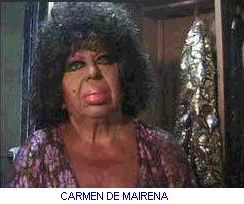 In November 2006 and October 2008 Carmen was arrested as part of a crackdown against the prostitution of Rumanian women, in that she had rented rooms used by the ring.

However this has not affected her television career and in 2010 was a candidate in the Catalan elections.
carmendemairena.galeon.com/index.html      ES.WIKIPEDIA 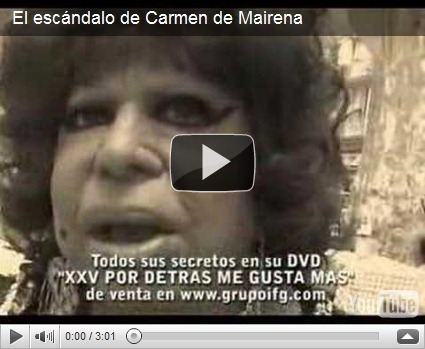