Anita Valerio was born in New Mexico to a father of Spanish descent and a Kainai (Blackfoot) mother from Alberta. She was active in the American Indian Movement as an adolescent, and visited the Pine Ridge Reservation when it was under siege by the FBI after the Wounded Knee occupation.

She was a punk rocker and a poet, was an out lesbian for 14 years, and contributed a chapter to the influential feminist anthology, This Bridge Called My Back.

At age 32, the transition to Max began: he identified with a quote from Carl Jung: “Free will is the ability to do gladly that which I must do”.   On the effect of testosterone:


"I came into transition feeling very strongly that I was not going to 'buy' into what I thought were 'masculine' or male behaviors, many of which I found repugnant . I had that feminist background you know! I also just thought that so many of these feelings or behaviors were caused only by socialization. The revelation of the testosterone for me, was that the truth was so much more complex. Ultimately, this gradual change in perception was very humbling. I had to find that I was wrong, and that many of these feelings are fed by testosterone and not simply by socialization as I had thought."

During transition and after, Max was friends with Viviane Namaste, Mirha-Soleil Ross, Margaret O’Hartigan, Anne Ogborn and Gianna Israel. 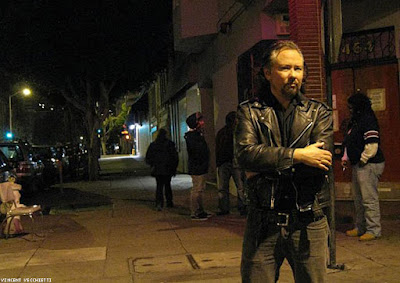 Max lives in San Francisco and after doing genealogical research found that he is also part Sephardic Jewish and part northern European. He is a poet, essayist and actor, with a taste for the transgressive. He has worked with beats and punk bands.

Max's autobiographical book, The Testosterone Files, was a Lambda Finalist in 2006.


“Certainly, in the beginning, I missed being identifiably queer, although I also hung out a lot at first with gay men, and often, people mistook me for gay. It was a long process of adjustment though, to accept being seen as just another straight guy. Although, I think I still give off something of the bohemian and the punk, it never really goes away. And, in the transworld, my views are often iconoclastic and quite contrary to the accepted ‘line’...

My gender freakiness is now more stealth, and as such, I think it actually has even more power to upset people and open them to new possibilities. When people find out I am a transman, they find it to be extremely shocking and yes, it ruptures their view of the strict binary. In some ways, being just an ordinary appearing man is even more disruptive of their perspective. They expect me to look androgynous and since I do not, their minds are completely blown. So, there is provocative power in my seeming ’normalcy’. Believe me, I love that! I still do love being provocative. (Boyd)”

Trans men differ in how they react to testosterone.  However if the effects are as Max says, does this mean that hormonally changed trans men are a different gender variation from those who transitioned in earlier decades and centuries when hormones were not available?