Jeffrey Jones was born in Atlanta, Georgia. In 1966, he married Louise Alexander, whom he met at Georgia State College, and they had a daughter. Jones did the covers for over 150 books, and is especially known for the ones that he did for Ace science fiction paperbacks.

Jeffrey and Vaughn Bodé did transvestity together in the early 1970s. 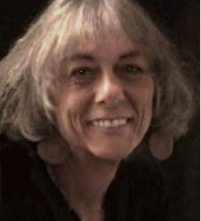 Jeffrey had a comic strip, 'Idyll' in National Lampoon, 1972-5. He also painted fine art. From 1975-9 he was part of the artists’ group, The Studio, which lasted only just over three years but has had a lasting impact. He had a strip 'I'm Age' in Heavy Metal, in the early 1980s. 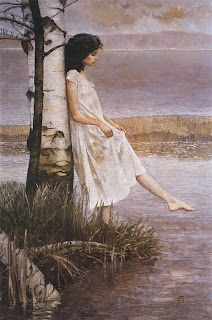 Jones was known for his lyrical linework and ethereal paintings, and the artist Frank Frazetta said that he was "the world's greatest living painter".  In 1986 he won the World Fantasy Award for best artist.

After decades of denial sustained by drugs, Jones transitioned as Catherine in the late 1990s.

In 2001 she had a nervous breakdown and lost her home and workspace. Aided by friends she was able get through and start painting again. However her health declined again. And she died of complications from emphysema and bronchitis, aged 67.

*Not the artist Katherine Jones.
EN.Wikipedia