Marie-Louise Victoire Girardin was born in Versailles, France, daughter of a former royal gardener turned wine merchant. In 1776 she married a café owner: in 1778 their 11-month-old son died; in 1781 her husband died. Soon after the revolution, she gave birth to an illegitimate child, and fled in disgrace.

She disguised as male, and went to Brest where as Louis Girardin he was able to find a post as a steward on the ship La Recherche. As a steward, Girardin had a small separate cabin and was not required to have a medical examination.

La Recherche sailed to and explored what are now Tasmania, Western Australia and New Caledonia. The expedition fell apart in the Dutch East Indies on receipt of news that the French king had been executed.

The shipmates apparently suspected that Girardin was not a man, but he maintained his gender with determination, even fighting a duel with an assistant-pilot. There is evidence that he was involved with a young ensign. They both died of dysentery, only one day apart. 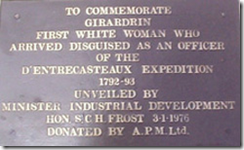 The ship’s surgeon revealed that Louis was female-bodied.