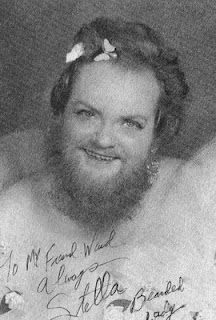 Betty MacGregor was raised in Battle Creek, Michigan. Even as a young woman she had to shave up to six times a day. She did a master’s degree at the University of Michigan to work with gifted children. While working at the hospital, she she would slip away for a quick shave to avoid funny looks from patients and doctors.


During World War Two she let her beard grow and started working in circus sideshows. She married twice. Her first husband died in the war, and the second died in a road accident. However the demand for bearded ladies had passed, and in the mid-1960s she made only $50 a week.

This is the only case that I have heard of where a bearded lady later becomes a man.

Unfortunately, the manager did not tell Hartzman whether MacGregor's change was aided by hormones and surgery or not.
Time: 21:20