Ed was born and raised in Poughkeepsie, New York. After tentative jobs as a cinema usher, and in musical groups, he joined the US Marines at age 17 just after the US entered the Second World War, and served until 1946. 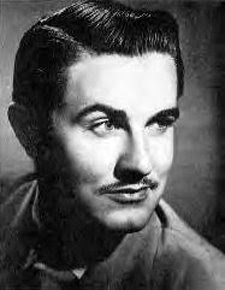 He claimed that he was in combat in the Marshall Islands, Naumea and Tarawa, that he had his front teeth knocked out by a Japanese soldier, and was later machine-gunned in one of his legs. That he was awarded several medals and honorably discharged, and that he had fought in battle with a bra and panties under his uniform. However he completed his service as an office typist.

He also claimed that after discharge he worked in a carnival as the geek and as the half-man-half-woman. He also worked in San Francisco as a female impersonator. His trick at parties was to disappear and reappear en femme, sometimes even shaving off his moustache to do so. Often he used the name, Lily.

In 1950 he worked as a drag stunt double for Ellen Drew in The Baron of Arizona. He had a special thing for angora sweaters, and would borrow one from his then girlfriend, Dolores Fuller (who would later write songs recorded by Elvis Presley). She put up with his cross-dressing for a while, but could not really handle it, and so would not marry him.

In the early fifties he was t 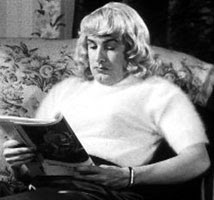 rying to break into Hollywood as a director. Exploitation producer, George Weiss, was seeking to take advantage of the media fuss surrounding Christine Jorgensen, and Wood talked himself into the film. Jorgensen, quite sensibly, wanted nothing to do with the project, so Wood rewrote the script drawing on his own experiences, and starred himself (under the name of Daniel Davis) and Delores Fuller.  ++As the film was being made, there were newspaper reports in Los Angeles of an admitted transvestite, Arnold Lowman, who was attempting to alter the terms of his divorce.  Wood made an announcement to the press that the film would not be based on that newspaper story. ++ The film was released under various names, but is best known as Glen or Glenda, 1953. It is actually a plea for tolerance of transvestites and transsexuals.

While it is made in the format of psychiatric case studies it does not have the attitude of condemnation common to the genre. However Glen or Glenda is also camp with a surreal narrator, played by Béla Lugosi completely separated from all the other characters and situated in a laboratory with smoking test tubes and human skulls, more suitable to a cheap horror film or exploitation movie, and it includes passionate psychodramas involving sex changes, bondage and flagellation.

In 1955 Ed married Norma McCarthy, but she kicked him out when she found that he was wearing female underwear. The marriage was annulled six months later. He then married Kathy O’Hara who remained his wife until his death.

Bela Lugosi starred again in Wood’s Bride of the Monster, 1955, and then died after shooting only a few seconds for Plan 9 from Outer Space, 1959 (which also features Bunny Breckinridge). It was largely financed by the local Southern Baptist Church, which retained the rights to the film. Wood’s films were quickly and cheaply made, up to 30 scenes per day as compared to only one in Hollywood A-movies. Retakes were rarely done even when they were obviously needed. Wood’s films rarely made money. Other actors in his stock company included the Swedish wrestler, Tor Johnson, the psychic Criswell and television horror hostess Vampira (Maila Nurmi).

Ed’s wife Kathy reports that that when Ed and Tony Curtis were both at Universal Studios, they would borrow dresses from the wardrobe there and try them on.

Wood expanded the adventures of Glen Marker, the protagonist of the Glen or Glenda, in two of his porno-thrillers: Killer in Drag, 1965, and Death of a Transvestite, 1967, where Glen is doing contract killings to pay for a sex-change, and then, on death row, will tell all if he can die in drag.

His writing of pornography became his major source of income, although he worked with Steven Apostolof in making soft-core films. 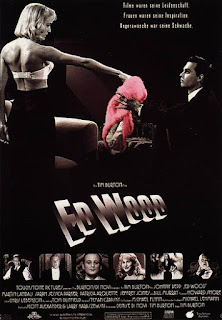 acquainted with the science fiction writer who would later become Jean Marie Stine. Jean later wrote of his early life.

He died in poverty, of a heart attack, while watching television.

Two years after Wood’s death, he was the winner in the Medved Brothers’ Golden Turkey Awards as the worst director ever. This started his cult, that culminated in the film of his life made by Tim Burton in 1994, and in founding in 1996 of the Church of Ed Wood which has over 3,500 baptized members.

*Not the British Foreign Secretary, nor the Canadian philanthropist.

Glen or Glenda uses the word “transsexual” the same year that Harry Benjamin is supposed to have coined it.

Glen or Glenda is in effect the first cinematic defence of queer lifestyles, eight years before Basil Dearden's Victim, 1961.

Ed was active in heterosexual transvestite groups in Los Angeles in the 1950s and 1960s. So was Virginia Prince. But neither appears in the books about the other.

Glen or Glenda is not Bela Lugosi’s only drag movie. The year before, 1952, he had gone to England to star against Arthur Lucan in Mother Riley Meets the Vampire.