Daniel Patrick Carroll was born in Cork. Although Irish, he served in the Royal Navy at the end of the Second World War where he first started doing drag shows.

He had a brief career as an actor of male roles after service in the Navy, but achiev 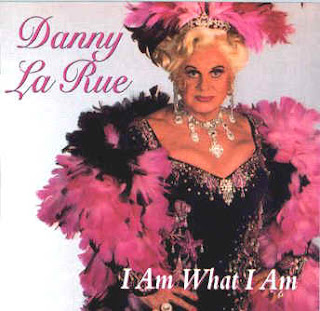 ed success as Danny La Rue in impersonation. He progressed from repertory theatre to cabaret in London’s West End. He became a star appearing in smart London nightclubs, and in 1964 opened his own club.

He was the most successful drag artiste in Britain, and among Britain’s highest paid performers in the 1960s, although hardly known in the States. His act emphasises that he is a man in drag with giveaway comments, and, in the old tradition, his wig comes off at the end.

He appeared before the Queen in 1969, 1972 and 1978. A notable success was the live version of Hello Dolly, which opened in Birmingham in 1982 and then transferred to the Prince of Wales Theatre in the West End. This was the first time that Dolly had been played by a man, and also the first time that a man played the female lead in a major musical.

He spent most of his career emphasizing that he was a “normal heterosexual”, but in recent years has been more candid that he was in fact gay. He lived many years with his manager, Jack Hanson, until Jack died of a stroke.

‘La rue’ has been absorbed into Cockney rhyming slang to mean ‘a clue’.