Vaughn Bodé was born in Syracuse, New York. His father was an unpublished poet and frequently drunk, and 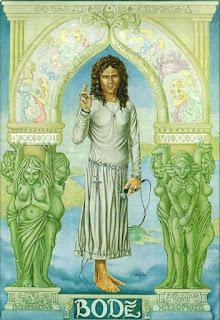 his mother worked at General Electric. From the age of five, Vaughn was drawing. At the age of 16 he first drew what would become his major creation, Cheech Wizard.

He served one year in the US army, and then ran away but received a honorable discharge on a psychiatric basis. He married Barbara at 20.

His self-published Das Kampf, 1963, was one of the first underground comics. He was editor of Gothic Blimp Works, the first weekly underground comic in the 1960s. His Deadbone was featured in Galaxy Magazine 1969-71, his Cheech Wizard in National Lampoon 1971-5, and his Junkwaffle comics were published by Last Gasp 1971-4. In 1969 he won a Hugo Award as best fanzine artist, and in 1975 a Yellow Kid Award.

Much graffiti art is based on templates pioneered by Vaughn. He pioneered putting sexual content in comics and cartoons, and inspired others such as Ralph Bakshi.

He was a heterosexual swinger, participating in group sex. He boasted how he had had sex with four women in four different cities in four days. He made Barbara submit to S&M practices such as being locked in a trunk for six hours.

By 1970 his interest in transvestity had developed from looking at pictures to dressing in private. As he continued to desire women, he believed that he must be a unique ‘unisexual’, a forerunner of humans to come. He started wearing female slacks, blouses and boots, grew his nails long, and began carrying a shoulder bag. He was encouraged by fellow cartoonist, Jeff, later Catherine, Jones, to move on to skirts and shaving his body. In 1971 they shared a studio in Woodstock, New York, and did transvestity together.

He met Guru Maharaj Ji (Prem Rawat) in New York in 1971, and felt that he had received his holiness. He chose to attain full enlightenment by the fast track of using autoerotic asphyxiation to induce mystical experiences. 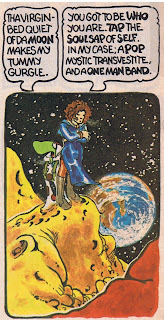 Barbara was granted a divorce in 1972 on the grounds of cruel and inhuman treatment. He responded by saying that he loved her.

Bodé and Jones continued to dress femme together. He found a female partner with whom he could be submissive. He started a relationship with a male drag performer. He took female hormones for six weeks but stopped because he still wanted his erections.

In his last work, Schizophrenia, he included a confessional running below a collection of Cheech Wizard strips. He describes himself as “auto-sexual, heterosexual homosexual, mano-sexual, sado-sexual, trans-sexual, uni-sexual, omni-sexual..”. In 1974 Vaughn moved to San Francisco. He did lots of drugs. It was said that he was looking for a woman who would kill him, who would sacrifice herself to a life in prison by doing a ritual murder.

He had found god by means of autoerotic asphyxiation successfully four times, but on the fifth, the strap became entangled with some necklaces.

Some online sites describe Vaughn Bodé as homosexual. This is odd as he was obsessively heterosexual. If we use the Kinsey Scale, he would probably be a 1.

Note that he thought that being a heterosexual transvestite made him unique. Many histories of Virginia Prince and her movement exaggerate its importance. In the late 1960s/early 1970s both Vaughn Bodé and Charlotte Bach had not heard of it.

The obvious speculation is how Vaughn Bodé would have moved if he had not died at 33. He may have moved to a Kinsey 3. Would he have restarted hormones? I have known trans persons who also said that erections were too important, but who, a few years later, did complete a transition. However this is but speculation.
Time: 20:05