Bohdan Hluszko, of Ukrainian descent, played in Tesseract and with David Wilcox, and with other Toronto bands. He became one of Canada’s leading session drummers, and appeared on many albums. He played with over 50 bands including the Detroit Symphony Orchestra. 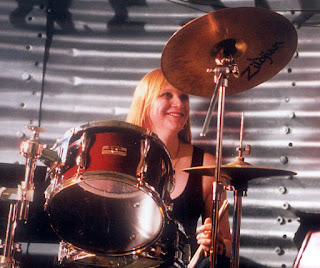 or their fifth album, Blue Plate Special, 1996, but was fired the next year after coming out as transgender.

In 1997, Bohdan was voted Canadian Country Music Association's 1997 drummer of the year, and Michelle had surgery.


Michelle was refused a female membership at a Toronto YMCA and barred from using the women’s locker room. She complained to the Ontario Human Rights Commission, which decided in her and others’ favour, to the outrage of the then Progressive Conservative government.

Michelle also sued the Ontario government for not covering sex-change surgery in the provincial health plan.

Michelle is featured briefly in The Complete Idiot’s Guide to Psychology.

*Not Michelle Joseph, the actress.
EN.WIKIPEDIA