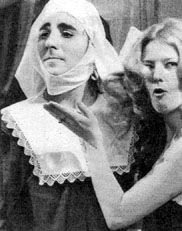 Keith was raised in Wembley, London. He was a failure at school, except for music. He left at 15. He was the drummer with The Escorts, and then The Beachcombers, and joined The Who in 1964. He was married to a woman from 1966 to 1973.

He was noted for playing fast and loud, and one occasion he literally exploded one of the drums 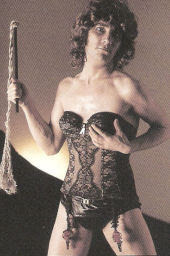 as a climax. He became famous for his destructions of hotel rooms and friends’ rooms. He destroyed plumbing by dropping fireworks down toilets. He drove a car into a swimming pool in Flint, Michigan – some say that it was a $50,000 Rolls-Royce, but there has been controversy about exactly which brand of car it was. In 1970, he ran over and killed a friend while escaping from hostile skinheads.

A heterosexual drag queen, his favourite drag was as the Queen. As Dougal Butler, his personal assistant puts it, Moonie 'frequently takes it into his head to act the ginger beer, esp

ecially if he can get hold of a dress or two'.

In the movies he portrayed a groupie who dressed as a nun in Frank Zappa's 200 Motels, 1971, wicked Uncle Ernie in Tommy, 1975, and a dress designer given to sampling the product in Mae West's Sextet, 1978. The tabloid press relished tales of Moon on the road with a pal referred to as Barry the Poof and his transvestite boyfriend.

He died from an overdose of Clomethiazole (Heminevrin), a medication taken as part of a programme to wean him off alcohol. He died in the same apartment that Mama Cass Elliot had died in four years earlier. He was 32.