Peter Farrer’s father was a Church of England vicar and schoolmaster who lived in various parishes, and during the Second World War had a parish in the Isle of Man, where Peter and his twin sister attended the independent King William’s College. Peter was head of the cadet force and captain of the rugby team. It was at this time that he found that he was interested in wearing female clothing.

He did his national service 1946-9 in the Army and was posted to Trieste. He then went to Oxford University where he read Philosophy, Politics and Economics.

In 1952 Peter married his dance teacher, Joan – his father officiated. He also became a tax inspector, where he remained until retirement. Peter and Joan had one son.

From 1964-6 they were in Nairobi where Peter helped set up an Inland Revenue system for the newly independent Kenya. In 1968 he was posted to Formby outside Liverpool, where he stayed. He was promoted to Senior Inspector and dealt with the tax affairs of major Liverpool companies.

His wife knew of his cross-dressing and research thereof, and permitted it only when she was elsewhere. Unfortunately Joan was afflicted with early-onset Alzheimer’s and died in the 1970s.

Peter began building a collection of dresses, but apparently never cross-dressed outside his home. In his lunch breaks he visited Liverpool museums to study Victorian dresses and corsetry. He joined the Costume Society and the Northern Society of Costume and Textiles. Through the former he met his second wife, Anne Brogden, a lecturer in art and fashion. They married in 1982 and bought a house in Garston, south Liverpool, where they created an outstanding fashion library that included complete runs of Vogue, Queen, The Englishwoman’s Domestic Magazine and other fashion magazines.

Peter had a particular interest in dresses made of taffeta. He had such dresses especially made by the Brighton-based dressmaker Sandi Steyning, owner of the Kentucky Woman Clothing Company. He was also a collector and editor of primarily letters to newspapers re enforced cross-dressing of young boys, mainly in England, and during the early 20th century, but also regular cross-dressing.

In 1985 Peter contacted The Glad Rag, the publication of The Transvestite/ Transsexual Support Group run by Yvonne Sinclair and became a contributor, mainly of historical letters.

In 1987 Farrer published a 44-page pamphlet Men in Petticoats: A Selection of Letters from Victorian Newspapers. It features letters and photographs from 19th-century publications such as The Family Doctor, Modern Society and Society. Central attention is devoted to Fanny and Stella and their trial in 1870, but there is also discussion of the joys of tight-lacing. The pamphlet and the books that followed were self-published under the publisher name of Karn Publications Garston: Karn was Peter’s mother’s maiden name.

After retirement he was able to visit major libraries in London and Oxford, Richard Ekins’ Transgender Archive in Ulster and the Kinsey Institute in Indiana.

In 1992 Farrer published In Female Disguise: An Anthology of English and American Short Stories 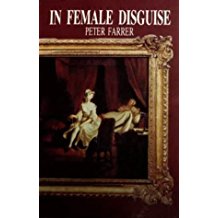 and Literary Passages, which featured prose stories from 1475 to 1900 by authors such as Walter Scott, Conan Doyle, Rudyard Kipling etc. but not poetry or drama (so nothing by Shakespeare).

Men in Petticoats was followed by The Regime of the Stay-Lace, which paid more attention to ‘petticoat punishment’ (forced femininity) in Victorian newspapers that the first booklet, and also Borrowed Plumes, which found much cross-dressing content in newspapers 1989-1912 (some of which had already been published in Glad Rag).

Richard Ekins, in both his books, thanks Farrer for his contributions. Farrer contributed two papers to Blending Genders, 1996 (ed Richard Ekins and Dave King), one on cross-dressing in literature and the other on the newspapers that he was analysing in his books with examples of the correspondence from readers.

Farrer had been doing an MA in Victorian literature at the University of Liverpool on ‘Women in Control’ and was awarded his degree in 1996.

In 1997-8 Farrer published in two volumes, Confidential Correspondence on Cross Dressing, 1911-1920 taken from the publications New Photo Fun, New Fun, Fun, Bits of Fun – and referring to the mentions in James Joyce’s Ulysses. Some of the letters had been published in Glad Rag.

There remained other contributions to Glad Rag that did not fit in Borrowed Plumes or Confidential Correspondence, and that was published as My First Party Frock in 1997.

Through a chance reading of an article in a 1902 magazine, Farrer had become aware of Maurice Pollack (1885-1918), son of Polish immigrants in Birmingham, who became an accomplished child female impersonator but enlisted during the war and died of wounds in the latter stages of the Palestine campaign. Peter was able to reconstruct Pollack’s life with the help of his family, and published the research as a book.

He then turned his attention to London Life 1923-41, the major publication between the wars that paid 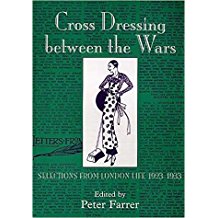 attention to cross-dressing and similar topics and printed readers’ letters on such. This research was published in two volumes, 2000 and 2006.

Farrer also gave papers at the Gendys conferences. In 2002 his Gendys paper was a response to Gary Kates’ Monsieur d'Eon is a Woman, 1995, the first book based on the d’Eon papers in the Brotherton Collection at Leeds University. Farrer challenges Kates’ conclusion that d’Eon did not wear female clothes until ordered to do so by the French king.

In 2004 his Gendys paper was on the Louise Lawrence Collection at the Kinsey Archive. In this he gives a summary of Bessie/William Beck and his wife. William had been subjected to petticoat punishment in the 1920s, found that he liked female clothing and as an adult married a dominant woman who continued his forced femininity. While one does assume that such stories are fiction, Peter investigated further and found letters by Bessie and wife to Transvestia (despite Virginia Prince’s noted aversion to fetishism), and to Toronto’s Justice Weekly.

In 2006 Farrer wrote a summary of his work for Transgender Tapestry. He had already been attending to the Toronto publication Justice Weekly, 1956-1972, and its continuation of the tradition of London Life, and published a book on in in 2011. 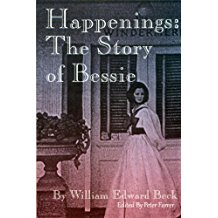 Farrer had obtained Bessie’s autobiography, edited it and published it in 2012. That was his last book. 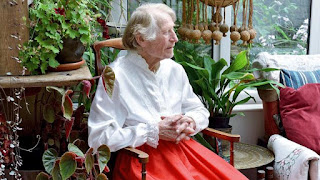 In 2015 the Liverpool Homotopia festival featured Transformation: One Man’s Cross Dressing Wardrobe, based on Peter’s life-time collection, and with the books and magazines, they have become a permanent exhibition at the National Museums Liverpool.

* Not the member of the board at Scottish Water; nor the visual-effects film person; not the chartered surveyor;

by Peter Farrer: (all published by Karn Publications Garston except where otherwise stated)
about Peter Farrer:
EN.Wikipedia


Peter Farrer is thus a major trans historian, although some would prefer that there be a greater distance between transvestity, petticoat punishment and fetishism.

Farrer's books were self-published, and Karn Publications Garston has closed down. Some of the books have become very expensive.  I hope that his executor is making some arrangement for the books to remain available.


‘The combination of low illiteracy rates and the broad suppression of books on sexuality made magazines a particularly important source for information about sex during the interwar years.The generation coming of age in the 1920s and 1930s saw reading as a part of their lives, but books about sex remained hard to access. Libraries refused to stock risqué novels and sexological works by Havelock Ellis, Magnus Hirschfeld, and Richard von Krafft-Ebing. Fearing ﬁnes, imprisonment, and hard labour, most booksellers stocked only legal books. As a result, those who actively looked for information about sexuality often had a hard time ﬁnding it. One source of information proliferated, however: individuals could eke out a sense of sex from materials at the newsagent’s shop. “Every district, even the poorest,” had a few newsstands that sold magazines and newspapers. George Orwell offers a compelling description of the place of such shops in the local community: “You never walk very far through any poor quarter in any big town without coming upon a small newsagent’s shop. The general appearance of these shops is always very much the same: a few posters for the Daily Mail and the News of the World outside, a poky little window with sweet-bottles and packets of Players [cigarettes], and a dark interior smelling of liquorice allsorts and festooned from ﬂoor to ceiling with vilely printed two penny papers, most of them with lurid cover illustrations in three colours.” Intellectuals recognised that periodicals shaped the tastes and minds of the population. “Probably the contents of these shops is the best indication of what the mass of the English people really thinks and feels. Certainly nothing half so revealing exists in documentary form. Best-seller novels, for instance tell one a great deal, but the novel is aimed almost exclusively at people above the £4-a-week level.” A newsstand magazine, London Life boasted a circulation at over ﬁfty-ﬁve thousand before the Great War, according to David Kunzle, and this ﬁgure rose throughout the interwar years. Advertisements for the magazine were placed on “1,000 cinema screens throughout Britain” in 1928, and it was available in railway stations across India.’ (“Fashioning Fetishism from the Pages of London Life”, The Journal of British Studies, 51, 2012: 667-8)