Arnold-Lèon Leber was Swiss although born in Germany. Leber’s father disappeared during the Great War, and was replaced by a step-father given to drunkenness who in turn disappeared when Leber was 11.

By then Leber was already praying, to God and to the fairies, to be turned into a girl.

Leber completed high school and became a clothing salesman (a position that required an apprenticeship). In 1932 Leber was called up to do military service and was pleased to be assigned to be a nurse. However rheumatic fever brought this to an end, and Leber returned to selling women’s clothing. This facilitated cross-dressing although it remained very private.

With the depression Leber was no longer able to earn enough, and was arrested 22 times for non-payment of debts and petty larceny. After release he worked for some time in Germany. On return he was arrested as a spy and served 18 months in gaol.

After unsatisfactory sexual affairs with both men and woman, Leber was admitted to a psychiatric clinic in Berne. He threatened suicide if they did not turn him into a woman. He had read about such changes in a Prague newspaper – he read up on the scientific literature of the day about sex changes. The doctors regarded him as a morally defective transvestite, and were considering committing him to an institution. Warned of this he escaped to Geneva.

A psychiatrist there treated Leber with psychotherapy supplemented with ovarian hormones, but without success. In 1941, he referred the patient to Dr Charles Wolf, the noted surgeon in La Chaux-de-Fonds. Leber threatened suicide if not changed into a woman. Dr Wolf was struck by Leber’s feminine contour of the body and her developed breasts. He agreed to operate. He did an orchiectomy in October 1941, a penectomy in January 1942 and a vaginoplasty in October 1942. The method was a variation on that of Dr WF Sneguireff of Paris who had created a vagina for a cis woman in 1898 using a segment of her rectum – Wolf used a segment of Leber’s intestine. The last operation did not go well and Leber had to spend five weeks in hospital and then another five weeks under close medical supervision at home.

Leber, now using the name Arlette-Irène, quickly applied to the legal authorities that she be able to call herself a woman, and to dress so. Her psychiatrist formally supported this request. The court appointed two experts to study and to decide the matter. They were Dr Jean Clerc, Professor of Legal Medicine at the University of Neuchâtel, and Dr Otto Riggenbach, Psychiatric Consultant to the Physician-in-Chief of the Swiss Army. They took two years. They considered the precedent of Margrith Businger who was able to change her civic status in 1931 after only an orchiectomy.

Clerc described Leber as a constitutional invert. As surgical changes were complete, the bearing of a masculine name was likely to be a source of continual trouble and a change of civic status was justified.

Riggenbach found that Leber was a psychopathic personality with little moral sense, hysterical and masochistic tendencies, but would not have pursued a change of sex unless a powerful biological urge had driven him to do so. However he seemed much happier and calmer since assuming the role of a woman. Riggenbach said that Leber should be permitted to change civic status, but be kept under constant supervision and be forbidden to marry.

The Cantonal Court decided that the issue was medical and not legal. By a majority of one, Leber’s request was granted (despite the refusal of the judge to sign the verdict). Riggenbach’s constraints were not imposed. Leber’s civic status was changed to female, she was removed from the voters’ roll (Swiss women did not get the vote until 1971), and she got a partial tax refund.

For two years she was unemployed, but then found a full-time job in Biel/Bienne. 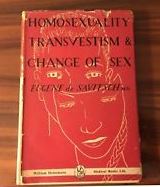 In 1956, Riggenbach evaluated her and concluded: ‘The operation, on the one part, combined with the permission of the authorities to change her civic status, on the other, has turned an unstable and unhappy individual into a useful and contented member of society’.

It is not known what happened to Mme Leber after that.