Amancay Diana Sacayán, one of 16 siblings of aboriginal Diaguita descent, was born in Tucumán in northwest Argentina at a time of a state emergency in the province declared by President Isabel Perón.

Later the family moved to Gregorio de Laferrère, a suburb of Buenos Aires.

Diana came out as trans at age 17. She was arrested several times for being herself and in jail joined the Partido Comunista de la Argentina. In 2011 she left the Party and founded the Movimiento Antidiscriminatorio de Liberación (MAL) which was particularly concerned with human rights for LGBTI persons.

She worked with the health services of La Matanza Partido (which contains Gregorio de Laferrère) so that trans persons could access health care. She also made trans persons, aboriginals and the prison population aware of their rights – in particular she pushed for the state to recognize a person’s declared gender identity. She also got Buenos Aires to introduce a work quota whereby one percent of jobs in public administration are reserved for trans persons. She worked with other persons to lobby the Argentine state, a process that led to the Ley de Identidad de Genero in 2012. 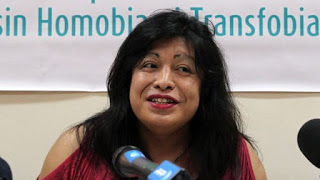 Sacayán was the first trans activist to get a female ID card, and was given it personally by President Cristina Fernandez de Kirchner.

In 2012 she ran for the post of Ombudsman on behalf of the La Matanza party, and was one of three finalists – the first trans person in Argentina to achieve this level of recognition. In 2014 she was elected Trans Alternate Secretary of the ILGA Council at its World Conference in Mexico City.

In October 2015 she was brutally stabbed to death in her apartment while bound hand and foot, and gagged. 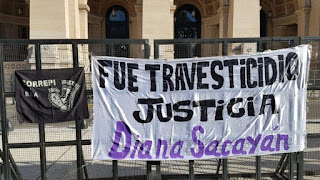 ‘Travesticidio’ put into common use. In May 2016 the Amancay Festival was held in La Matanza in her memory, and 28 June 2016 the First National March against Transvesticidio was held in Buenos Aires.

Gabriel David Marino was arrested and charged with the murder of Diana Sacayán. He was convicted of transvesticidio "aggravated homicide due to gender violence and hatred of gender identity" - first person to be sentenced under a legal provision specifically targeting anti-transgender crimes.

Police believe there may have been a second person involved in the murder, but he has never been identified.

Marino was sentenced to life imprisonment in June 2018.