Ralph was born in London, the 11th of 13 children to Jewish parents, The father was a fur merchant of varying success, and also a Yiddish language novelist and playwright, although without any success.

At age five, Ralph contracted diphtheria, and for nine weeks was on the verge of death. From then on an older sister encouraged him to wear girls’ clothes and took him for walks so dressed. Even dressed as a boy he was regarded as effeminate, and would be beaten up by the boys at school.

The father refused a bar mitzvah for Ralph because of his effeminacy. At 15 he was taken from school and went to work for a friend of the father. One night, working late, he was raped by two co-workers, a boy and a girl. He told his father, who called the police and both assailants were sentenced to five years in prison. The girl died there.

Ralph, as Clara, went out at night, and found a sweetheart who kissed and held hands. However Clara finally had to tell the truth and the relationship ended. At 16 Clara asked the family doctor that her male organs be removed. The doctor called in the parents, and the father gave Ralph a good beating.

At 17 he was sent to New York to help a brother run the business. The brother let Ralph be Clara and even took her to parties. In 1918 Ralph enlisted in the US Army to make a man of himself. However he could not take it and deserted.

In 1921 he returned to London, as his father was dying. With his mother he took over the business, but the stress made him ill-tempered and he flew into rages. Despite this the business prospered. Clara met another who also aspired to become a woman. In 1923 Ralph met May, a young woman, 17. Under pressure from his mother, Ralph and May became engaged and then married. He could perform sexually, only underneath and when wearing something feminine. They managed to have a son and a daughter in the first three years, and then discontinued sexual activity.

They returned to New York, where Ralph became an office worker. He wore female clothing at home, and sometimes went out so dressed, against May’s objections, and later the children’s strong objections.

Ralph served in the US Army in the Second World War in North Africa, and admitted his earlier desertion. Early in 1945 he found work at the Veterans Administration as a clerk. He was also elected president of his local Veterans of Foreign Wars branch.

At the end of 1944, his daughter Barby and her husband set up a small business, and moved in with Ralph and May to save expenses. Barby nagged him constantly that he was not to be seen in female clothing. This got worse after the birth of a grandchild.

In spring 1947, after a late-night scene with Barby, Ralph dressed quickly and went out. He encountered a rookie policemen keen to make an arrest, and was charged with male prostitution. He was lucky to get a considerate judge, who required only a psychiatric report, after which he was released.

The fights with Barby got worse, and Ralph made a suicide attempt. Shortly afterwards, Barby, her husband and child moved to California. Ralph was able to be Clara more often.

She she became a patient of Harry Benjamin, and had surgery in 1957. Three years later she started living with a man, fifteen years younger, who was separated but could not obtain a divorce because he was Catholic.

In "The Transsexual Operation" by Tom Buckly, Esquire. April 1967,  we find: 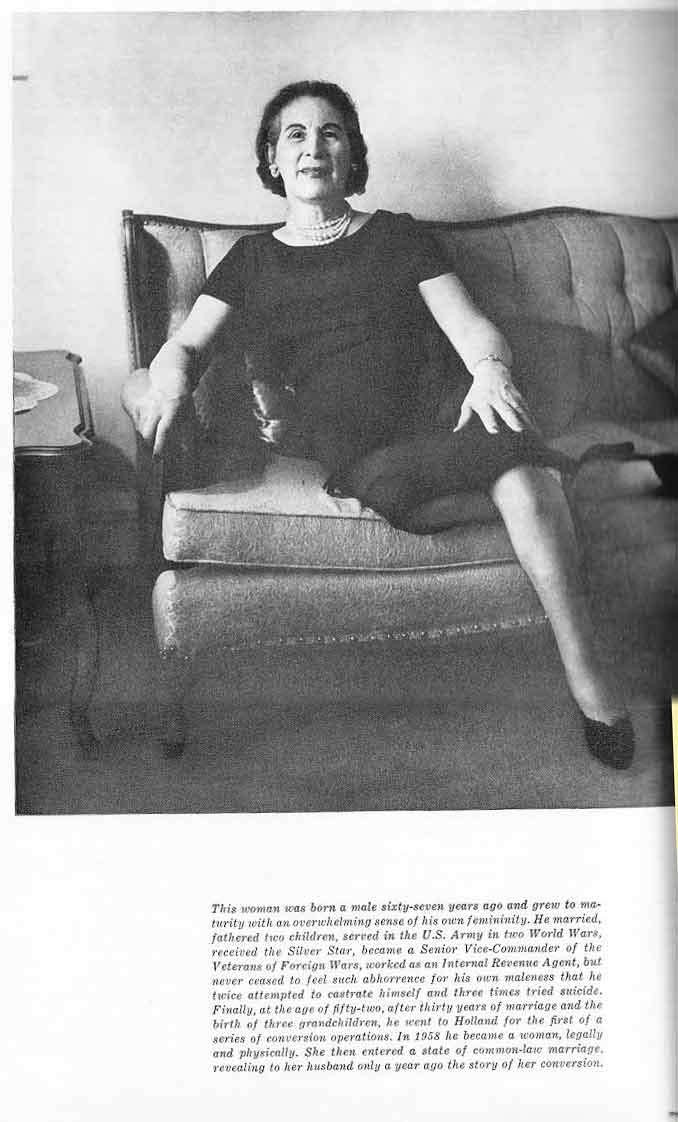