Dirk Luykx was born in New Jersey, the youngest of four boys, and wanted to be a girl since childhood. He went to Cornell University to do Civil Engineering. In 1955 he interrupted his studies to serve in the US Army. He was in Japan and Korea for three years, and then five years in the Army Reserves. He returned to Cornell and completed his engineering degree in 1961.

Dirk moved to California and worked in engineering design, city planning, and public works. He was also the art director of The Los Angeles Youth Theater. During this time Dirk as Vicky discovered and participated in Virginia Prince's Hose and Heel Club.

Preferring art to engineering, Dirk returned to New York, and studied Fine Arts and Graphic Design at Cooper Union. In 1967, while still a student, Dirk was hired by publisher Henry N. Abrams, Inc. where he continued to work until retirement. In addition to the books listed below, Dirk later worked on behalf of the publisher on Morris Louis: The Complete Paintings, The Art of Walt Disney, Windows at Tiffany’s, The History of Modern Art, Impressionism.

At this time Vicky was living with a woman, but also investigated the homophile  Mattachine Society. Here he met Lee Brewster who had been organizing drag balls as fund raisers, and also Chris Moore, the Jewel Box Revue performer. When Lee grew tired of the Mattachine Society's disinterest in drag issues, and founded the Queens Liberation Front, Vicky was a founding member. 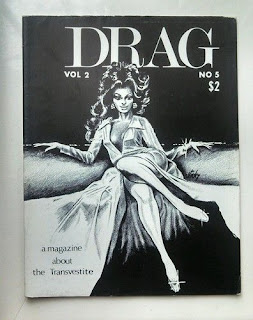 Lee initiated a newsletter which evolved into Drag magazine with Vicky doing the covers and illustrating stories in the magazine. The first issue credited Dirk for the cover, but from the second issue, Vicky was listed as Art Director. Initially the cover illustrations were Vicky's versions of herself in different situations, but then she started doing other people. “I was hoping for another Vogue – images of transvestites enjoying themselves, trying on clothes. All the expression was positive.”

Drag Magazine also evolved into Lee's Mardi Gras store. Vicky was often to be found there, but always as Dirk. After a while, Lee became bored with editing the magazine and Bebe Scarpinato took over.

At Mardi Gras 1978 in New Orleans, Vicky was with a Lee's Mardi Gras contingent when she met cis photographer Mariette Pathy Allen who was impressed by her posture: “who focused straight back at me. As I peered through the camera lens, I had the feeling that I was looking at neither a man nor a woman but at the essence of a human being”. As it turned out they lived 20 blocks apart in New York. Together they went to parties at Lew Brewster's Mardi Gras Boutique, to various clubs that put on drag shows, and to Fantasia Fair in Provincetown.

In the early 1980s, Vicky was an extra in a film, maybe New York Nights, 1984, in a scene in a drag bar with International Chrysis.

Vicky was featured in Mariette's 1989 book, which was brave of her in that Dirk was still working at Henry N. Abrams. Like Bebe Scarpinato, Vicky sometimes did a striptease on stage. Vicky's female lover became uptight about the parties, imagining all sorts of sex, and after ten years they separated.

Later, in the AIDS-ridden 1980s, Vicky lived with gay lovers. “With the AIDS epidemic, guys are doing drag as something else to do.” “I'm not political, but I very much admire those who are, and I believe that transvestites should be proud and should be honored for what they've accomplished.”

When he retired from Henry N. Abrams, Inc in 2000, Dirk Luykx was the Executive Art Director. Dirk died at age 70 of cardiovascular disease, and was interred at the US Military's Arlington National Cemetery. 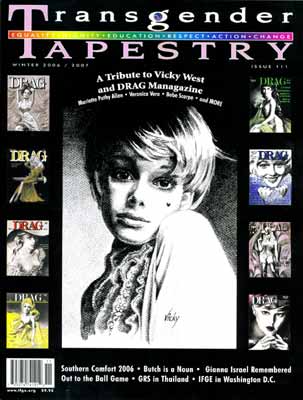 The Winter 2006/7 issue of Transgender Tapestry was largely dedicated to Vicky with several reminiscences and reproductions of her art: “to remain completely faithful to her work, we decided to print this tribute issue of Tapestry in black and white. We didn’t want the rich subtlety of Vicky’s charcoal sketches to be drowned out in a cacophony of color.”