Tony Murdoch was born in Texas. He was working in munitions in San Francisco during World War II when, being under aged, he used fake ID to see the impersonator show at Finocchio’s, and was sure that he could do better. 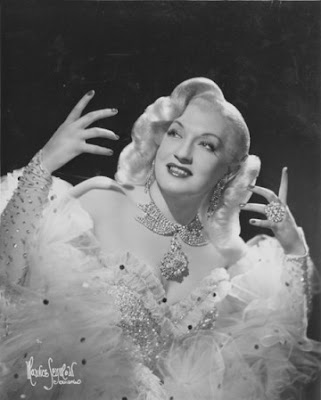 After the war he started performing as Tony Midnite in Galveston and then played clubs in many US cities. He joined The Jewel Box Revue in 1948, but later left to begin a career as a costume designer.  He was a friend and colleague of Hedy Jo Star.

He opened a studio in Chicago in 1952. He defied the Chicago Police Department which did not want impersonation acts in the city by booking The Jewel Box Revue for two weeks, and it was so successful that it stayed for eight months.

Tony returned to The Jewel Box Revue in 1958 and refit the entire show with costumes, which they wore for their Broadway appearance. He then relocated to New York, appearing at 82 Club. He did the costumes for the road shows of Gypsy and Carnival!, for the Metropolitan Opera and some television shows.

In 1964 he returned to Chicago and started his own show, which included Gayle Sherman. He was active in the gay movement there. He was part of the local demonstration against anti-gay advocate Anita Bryant in 1977, and again against the police harassment while Jane Byrne was Chicago’s mayor. He was a book reviewer for several publications.

Tony was inducted into Chicago’s Gay & Lesbian Hall of Fame in 1996.