Kaveney grew up in Acton, London. Before going to university, he spent some time with a group of trans sex workers in Manchester who helped with self-definition, and with self-defense. At Pembroke College, Oxford the gay scene was somewhat lacking:


“I wanted something that promised more, something wilder and saner. Something with radical politics and a sense of fun and experimental attitudes to the possibilities of sex and style and screaming in the street.”

A phone call to the newly formed Gay Liberation Front in London led to the TV/TS Group, which turned out to be run by Rachel Pollack then living but fifty yards from where Kaveney had grown up. Together they formed a transvestite presence at GLF meetings.

From the late 1970s Kaveney established a reputation as a Science Fiction critic, and also wrote on feminism, gay rights and censorship. Roz had completed transition by 1980.

In the 1980s Roz was a co-editor of Interzone science fiction magazine. From 1989 she was a founding member of Feminists Against Censorship. In the early 1990s she was in the Midnight Rose collective (with Alex Stewart, Neil Gaiman and Mary Gentle) that produced a series of SF anthologies for Penguin Books.

In the mid-90s, when she was Deputy Chair of Liberty, she wrote their report of transsexuals for submission to the UN. The Director, having come across the term ‘transgender’ and thinking it a more radical synonym, did a search and replace throughout the document. Roz persuaded him that the best solution was a policy switch in favour of appropriate rights for all trans people.

She was a contributing editor to The Encyclopedia of Fantasy, 1997. 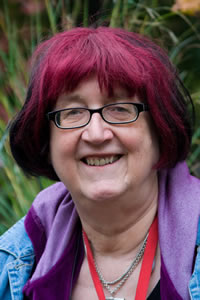 In her essay for More & Whittle’s Reclaiming Gender, 1999 Roz articulates six non-negotiable axioms as the basis for any workable transgender and transsexual politics:
She continues:


“The reformist transsexual agenda often sets up, as part of its argument, a largely false dichotomy between ‘people who pass’ and the inferior capacity of ‘people who don’t pass’. ... And, of course, none of us really know that we have passed all the time and as long as we fetishize the model of passing as the only way to be accepted as who we are, for just that long our self-esteem will be under threat from any small child or gutter journalist who feels like having a go. ... The possibility, or even probability, that someone passes most of the time is no defence for them on the rare occasions when they do not. You are only as safe as your roughest day.”