John Guidos, raised in New Orleans, was a loner, but he was also on the school football team. He married young to Kathy, they had two children and he took over and expanded his father’s gift shop. He dressed en femme secretly, and his wife avoided noticing.

In his late 30s, after losing his business and marriage, he managed a Domino’s Pizza outlet, and finally attended a cross-dressing club. Then while taking female hormones, he worked doing maintenance on hospital MRI and CAT scan machines. 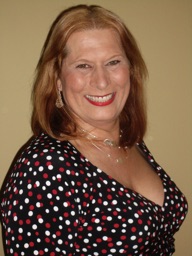 He waited until his mother died, and finally became JoAnn full time at age 51. Her ex-wife Kathy and her new husband were friendly and together the three of them fixed up a couple of properties to be run as bars.

By 2005 JoAnn was the proud co-owner with Kathy of Kajun’s Pub in downtown New Orleans. A few months later during Hurricane Katrina in August-September JoAnne kept her pub open as a place of refuge until armed troops forced the place to close, and all to evacuate.

She re-opened the pub once the emergency was over.

JoAnne is featured in Dan Baum’s book about New Orleans and Hurricane Katrina.