James Harries was raised in Cardiff, Wales. From the age of five, James had collected china and knick-knacks from car-boot sales and second-hand shops. He found a piece of porcelain that was valued at several thousand pounds. 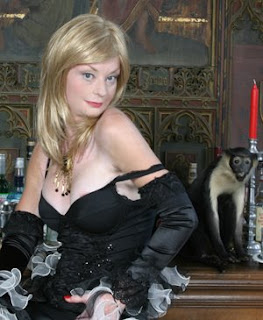 He became famous at age 10 when, curly-haired and bow-tied, he appeared on Terry Wogan’s BBC television chat show, where he demonstrated a precocious knowledge of antiques.

The family opened an antique shop. Three years later his family publishing company released his book on making money by spotting bargains. He left school at age 11, being home-tutored from then on.

After a fire at one of the family properties, his father was jailed for filing a false insurance claim, and all the family businesses failed. As James matured he was employed in a series of low paid jobs, but never lasted.

He started cross-dressing in 1997 and changed his name to Lauren. Lauren has said that a casual remark in a supermarket, that 'he should be a woman', helped her realize that that was what she wanted. She had surgery in 2001, followed by daytime television appearances.

The actor, Keith Allen, made a documentary in 2004 about the family. They told him that they are marriage counsellors, with a sideline in private investigation, and that all the family are Doctors of Metaphysics. Allen discovered that the degrees are sold on the Internet, and that Lauren’s counselling for transition was done by her mother. It also seems that 10-year-old James was not so much a child prodigy as a child well coached by his patents.

The Harrieses had had long-running problems with their neighbours, and on 8 July 2005, a gang of young men assaulte

d Lauren, her father and her brother Mark.

Her brother holds the world record for baking the largest Yorkshire pudding.

Lauren has become a minor television personality, appearing in Trust Me … I’m a Beauty Therapist and Big Brother’s Big Mouth. It was rumoured that she would be in Celebrity Big Brother, but then said that she would not participate because she could not bring medical supplies needed by a post-operative.

She has converted to Buddhism. In 2008 she was a cover girl for the magazine Transliving.

I don't understand the bit about 'medical supplies needed by a post-operative'. The only candidate is hormone pills, and it is no problem to take a take a break from them for a few weeks. I do so now and then.