The original Elizabeth was the daughter of Henry Tudor (known as Henry VIII) and Anne Boleyn. When she was three, her mother was executed and Elizabeth was declared to be illegitimate. 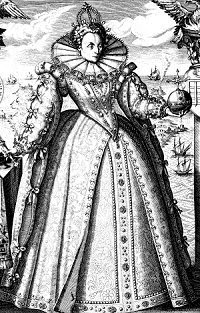 When Elizabeth was nine (or perhaps twelve), the plague was raging in London and to avoid it she was sent to Overcourt, a manor house at Bisley, a small village in the Cotswolds. There she befriended a boy of about her own age. He was her nephew, although sometimes described as her cousin: an illegitimate boy fathered by Henry Fitzroy, who was an illegitimate son of Henry VIII. The boy had been sent to Bisley to conceal his existence. Elizabeth died of the fate she had been sent to Bisley to avoid. The servants were terrified to tell the tyrannous but distant Henry VIII, who was about to visit. The illegitimate nephew was pretty, of about the same age and, most important, he rather resembled Elizabeth. It was easy to pass him off as 'Elizabeth' for a visit of Henry who was certainly not affectionate and was rather in a hurry.

However having started the imposture it proved impossible to let it go. The embarrassment of the boy's existence meant that very few questions were asked about his disappearance. An alternate version says that the boy was from the local village and had not actually met Elizabeth.

The replacement Elizabeth became Queen of England, Ireland and France in 1559 after the deaths of her supposed half-brother Edward, and her half-sister Mary. She reigned until she died in 1603 at the age of 69.

She never married; she became bald later in life and wore wigs; she left explicit instructions that there should be no post-mortem on her body; she took suggestions that she was androgynous and made a legend out of them. At Tilbury in 1588 during the crisis of the Spanish Armada, Elizabeth spoke to her troops, saying: "I know I have the body of a weak and feeble woman, but I have the heart and stomach of a King". 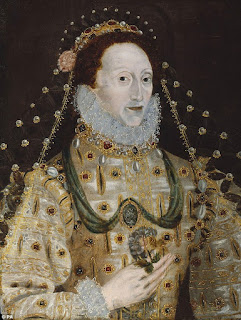 In Bisley itself, for over three hundred years the May Queen was always a boy in Elizabethan female costume. In the 1860s, the Rev Thomas Keble, during renovations at Overcourt, found an old stone coffin containing a girl’s skeleton in Tudor clothing. He had the remains reburied nearby, but the locations is no longer known.

The story was researched and popularised by Bram Stoker, the theatre manager and author of Dracula, who published it in his book Famous Imposters, 1909. A friend of his came across the legend while looking for a house in the area. Stoker visited the manor house himself, and going over the story point by point, became convinced of it.

People have different opinions whether Jackson, Blanchett, Mirren or Richardson was the best cinematic Elizabeth Tudor, but the most appropriate was Quentin Crisp in Orlando, 1992.
Time: 22:11