Hermann von Teschenberg trained as a barrister. He was connected to Austrian royalty, and entitled to be called Freiherr (Baron). He was described as charming everybody with his feminine gracefulness, and he said that 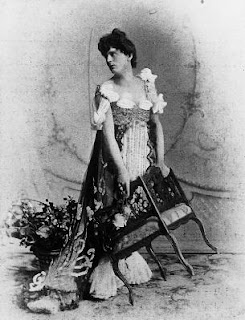 he would rather have been a maid in service rather than a son of a Minister.

At the age of twenty he was observed kissing a soldier in the Wiener Prater and was obliged to leave the country. He went to England where he became an acquaintance of Oscar Wilde, and translated some of his work into German.

After Wilde's trial von Teschenberg lived for a while in Paris and then Berlin. He worked for homosexual rights and became part of the inner-circle of Magnus Hirschfeld's Scientific-Humanitarian Committee. He was one of very few openly out gays in Berlin, and was often engaged to speak on the topic. When Hirschfeld was writing his Transvestiten, von Teschenberg provided a photograph of himself in drag, to be printed with his full name (however the Lombardi-Nash 1991 English translation does not include pictures).

He remained a Catholic and attended Mass quite frequently. He died in Naples in 1911 from the effects of his addiction to cigarettes.
EN.WIKIPEDIA