Harlem’s Hamilton Lodge, also known as Rockland Palace, was founded by the Grand United Order of Odd Fellows, Lodge 710, on 155th street and 8th Avenue in Manhattan. It was initially a home for affluent African Americans, and provided political events, banquets, church sermons, lectures and pageants. 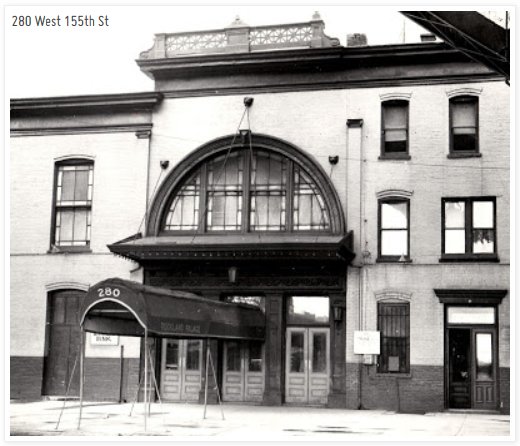 From 1869, it sponsored the Masquerade and Civic Ball each February, the fanciest such ball in New York. While transvesting persons attended from the beginning, the gay and trans component blossomed after a new group of organisers took over in 1923.The event was then informally known as the Faggots’ Ball or the Dance of the Fairies. It became the most popular gay event in town, attended by both black and white queers, and also artists and writers. About 800 attended in 1925 and fifteen hundred in 1926. Growing numbers of spectators attended not to dance but just to gawk. Three thousand spectators in 1929 watched two thousand dancers, and in the next few years a total of up to seven thousand spectators and dancers attended.

In 1928 the Committee of Fourteen, a private anti-vice organization that was mainly concerned with prostitution, and mainly in white neighborhoods, employed a black teacher to investigate Harlem’s nightlife. Following her report, Adam Clayton Powell, the pastor of the Abyssinian Baptist Church fulminated against sexual perversions, and the New York Age published his sermons. Bishop R. C. Lawson, the founder and pastor of Harlem’s Refuge Church of Christ attended the ball with two parishioners. He then offered a sermon titled “The ‘Faggots’ Ball, and What It Means in the Light of the Scriptures”, and drew an overflowing crowd to hear him denounce those at the ball, the spectators as well as the dancers. However the popularity of the Hamilton Lodge Ball continued to increase after their attacks.

All kinds of persons attended the balls: celebrities, socialites, businessmen, prostitutes, bohemians and families. Singer Ethel Waters attended and boasted that the drag queens to whom she lent gowns won prizes. Gay writer Max Ewing wrote in 1930: “all the men who danced . . . were dressed as women, wearing plumes and jewels and decorations of every kind”. The heiress A’Leila Walker and the singer Nora Holt were prominently present that year. Tickets were a dollar cheaper if you were in costume. Two of the daughters of Fred R Moore, the conservative black publisher of the New York Age, had short haircuts before attending and “They were dancing and having a good time, and they would come up to us. We’d say, ‘We’re women, no, no.’ . . . [but] they didn’t know whether we were the real thing or not.”

In early 1931 the New York police were harassing the Pansy Clubs, and later moved to close down the drag balls as well. However, the police - having made their point - backed down and the February 1932 Hamilton Lodge ball was on as usual, although competing events in Times Square and Madison Square Gardens were discontinued.

The ball is featured in two novels about homosexuality of the early 1930s.

Blair Niles, a middle-aged woman on the Social Register who investigated gay New York, in 1931 wrote:

“thousands of people crowding a great hall. Three thousand....No, more than that. Some one said there were ﬁve thousand, many of them sight-seers, come to look on. There were Harlem people and down-town people. There were celebrities of the stage and the literary world. A rumor went about that Bentrice Lillie was there, and for a moment many eyes focused on the box she was supposed to be occupying. …. Such crowds of people seen now through a haze of smoke—black people and white people and all the intervening combinations, people ﬁlling the boxes, leaning over the railings to look down upon those who thronged the ﬂoor. People packing the aisles and the stairways. The hall so hot. The air blue-gray, the electric lights showing as in a fog. The sound of many voices blended into one great reverberant voice. A great orchestra playing. The music seeming to come from far off. Figures dancing to that distant music. Throngs of people talking...staring...dancing. An incredible spectacle!

Now the ﬂoor being cleared by the police. This was a licensed masquerade party with police protection. All violations of the Penal Code of the State of New York scrupulously avoided. Thus it was the ofﬁcers of the Law who cleared the ﬂoor for the parade of the “fairies,” holding back the crowd, while a long elevated platform was set up in the center of the hall. They held back the crowd, too, while the “fairies” came on in single ﬁle, to mount platform and slowly walk its length, pausing now and then to strike attitudes, to stiffen into statuesque poses, to drop curtsies or to execute some syncopated phrase. The crowd surged forward and was again and again pressed back to make room for the paraders.”

Fird & Tyler, in their 1933 novel which was published in Paris, but banned in the UK and the US, wrote:

“The ball was too large to be rushed at without being swallowed. The negro orchestra on the stage at one end was heard at the other end with the aid of a reproducer. On both sides of the wall a balcony spread laden with people in boxes at tables. Underneath were more tables and more people. The dancefloor was a scene whose celestial flavor and cerulean coloring no angelic painter or nectarish poet has ever conceived.”

The Hamilton Lodge Ball, more than any other ball, was much reported in newspapers such as the Amsterdam News, and the New York Age, Baltimore’s Afro-American, and the Inter-State Tattler. In the 1920s the reports had used negative terms such as ‘subnormal’ and ‘fairies’, but as the attendance went up so did the positivity of the words used. In 1932 a reporter for the New York Age wrote:

“To one of the largest gatherings that has ever graced this hall [Rockland Palace] came the all-conquering Hamilton Lodge, resplendent in all the panoply of pomp and splendor, to give to Harlemites who stood in wide-eyed astonishment at this lavish display a treat that shall never be forgotten. The usual grand march eclipsed in splendor all heretofore given by them, and women screamed full-throated ovation as the bizarre and the seeming impossible paraded for their approval. . . . [We] say ‘All Hail, Hamilton’.”

In 1938 over 8,000 attended. The police then exerted pressure and threatened a raid. Seventeen AMAB persons were arrested including two laborers, two unemployed men, a dishwasher, a domestic servant, an elevator operator, a counterman, a handyman, an attendant, a clerk, and a nurse, along with a musician, an artist, and an entertainer. More than half were under thirty, and only one was over forty years old.

The Lodge found that securing the necessary permits was no longer possible, and discontinued sponsoring the event.