As Anita later told her tale to the News of the World:

Her parents in Hungary raised her as a girl, and sent her to school as such, even during the war. When she was 15 she found her birth certificate that said that she was a boy.  She was told to shut up and not ask questions.

After leaving school, she worked as a female in a factory. She found her first boyfriend and told him she was different from other girls. He said that he also had a proper girlfriend and now could have the best of both worlds.

When the Hungarian Uprising began in October 1956, Anita was afraid of being raped by the Russians, so she cut her hair, dressed in some of her father’s clothes and fled to the West. Sandor was shot in the knee, and was two months in hospital before getting to England. Sandor found work in a London hotel stillroom. He met and married a French women in 1959.  They had two sons, but separated after four years, and were divorced in 1967, with  the wife retaining custody of the children.

Anita returned to living as a woman. She was working as a cinema usherette when she met 17-year-old Peter, a building labourer.  They socialised and went on holidays with the other building workers. The major problem was his parents who objected to Anita being so much older.

She had applied for a sex-change operation as it was then known. Peter accepted this and they were able to get a council flat in Islington, north London.  In 1976 they decided to get married at an Anglican church in Hackney. She explained that she had lost her birth certificate in flight from Hungary. So they had to go to a solicitor and swear a declaration that she was Anita Verig Sandor born in 1940. 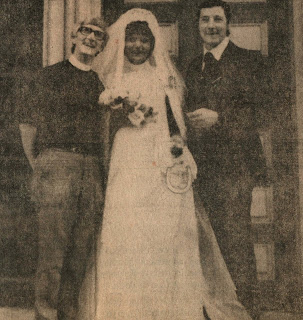 There were 50 guests at the wedding, and the vicar attended the reception.  All went well until somebody told the News of the World - three years later.


“But whatever happens in the future our ambition is to continue to be as happy as we are now.  If anything ever happens to Anita, I know that I’d never marry again.”

As readers of the books by Peter Farrer will know, parents cross-raising a child was considered a cause of adult transgender in the 1920s and 1930s.  However it was a very unusual claim by the 1970s.

I was rather naughty of Anita to drop six years from her age.

It is not mentioned whether Anita was making child support payments.

I presume that she was going to the Charing Cross Gender Clinic.  There were very few alternatives in 1976.
Time: 08:03