La Paloma - a nightclub outside Miami

Miami was not very observant of the alcohol prohibition laws when they were in force, and when they ended in 1933, it was ready to expand and to entertain the tourists who were coming in greater numbers.  It was in competition with Havana, and the newly available airplanes allowed tourists to go to Havana without stopping in Miami. While New York City closed down the Pansy Craze after the repeal of alcohol prohibition, would-be tourists were informed that it was not so in Miami.

La Paloma (=the dove) was a nightclub located on NW 79th Street, then an unincorporated part of Dade County. It featured strippers, female impersonators, off-color jokes. Kofoed commented of the clientele that you could find “homosexuals in evening gowns, trousered lesbians, and prostitutes”, and that performers “solicited customers for normal or abnormal sex practices”. The club was run by Al Youst (1902 -1973), an entrepreneur with an arrest record: for intercourse with a minor, selling liquor without a proper license, assault and battery, and burglary in New Jersey and Baltimore. Judge William Smathers of Atlantic City had released him after several months in jail on condition that he leave New Jersey: “Go away. Go a long ways away. Go to some place like Florida.” 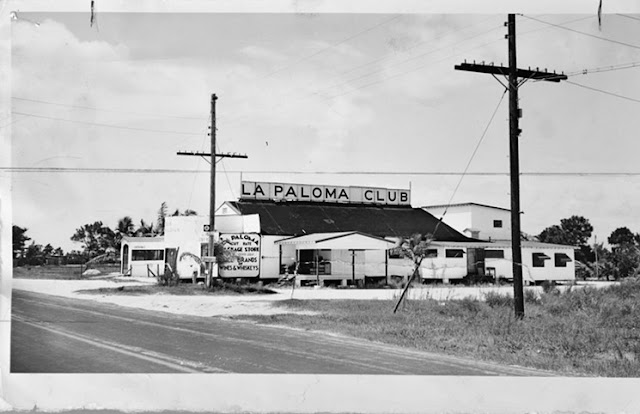 Not all in the county related to what Miami was becoming. In 1935 several dozen neighbors demonstrated, calling for La Paloma to be shut down. One called it a menace to the community’s health because “women and liquor prevail[ed]” without a proper license.

On Monday15 November 1937 there was a gathering of nearly 200 members of the local Ku Klux Klan wearing their standard long white hooded robes, and several dozen new members were inducted. They burned a fiery cross on public property. Then they charged into La Paloma. The band kept playing, figuring that it was all part of an act. However the intruders smashed furniture and musical instruments. They roughed up some of the performers and the staff. They told everyone to leave, and threatened to burn the place down.

However The Miami Herald affirmed:


“Law enforcement has not been turned over to the Ku Klux Klan in Dade County”.


“Every civic club of the Miami area is sure to approve the Klan’s militant stand against too rough divertissement which has characterized the city’s night life from 1934”,

and also opined that “once-famous hot spots” in Miami would now be unavailable.

The Dade County sheriff declared the club to be a menace, and ordered that the club remain closed. However it did re-open. Two weeks after the KKK raid, the sheriff and his men themselves raided the club.  This time the club again re-opened after two days. Youst vowed La Paloma would “reopen with spicier entertainment than ever.” He even incorporated actors dressed as KKK in the skits.

In July 1939 there was another police raid on La Paloma, and they arrested “four men employed . . . to wear feminine clothes and impersonate women in songs and dances”. None of the four appeared in court – they were represented by the club’s attorney, Fred Pine, who entered pleas of guilty. They were to pay a fine of $25 or serve “30 days on charges of vagrancy”. The one exception was an impersonator whose male name was Robert Trent, who appeared personally and was freed on a directed verdict.

The tourist industry was for a while too important. Sporadic raids continued in response to public nuisance charges to placate conservative residents, but in no way did the police attempt to eradicate such clubs. Indeed almost all raids were during the tourist off-season. For the clubs it was a cost of doing business.

In March 1940 Federal agents raided La Paloma. Youst was arrested on two “white slavery” charges for bringing in five young (17-year-old) women from Chattanooga, Tennessee and jailed when he was unable to supply a $20,000 bond. Other employees were released after signing affidavits. One of the transported five, Evelyn Clark, had become Mrs Youst.

Assistant district attorney, George Smathers, nephew of the Judge in Atlantic City, co-prosecuted both Al and Evelyn Youst. Al Youst, supposedly suffering from tuberculosis, attended the trial on a stretcher; Evelyn bottle-fed their child in the courtroom until the judge barred the crying child. Al spoilt his act by rising to enter a not-guilty plea. When the subpoenaed employees, mainly young attractive women, testified about exotic dances and after-hours activities, the judge banned all observers from the courtroom, and newspapers said that “testimony went beyond all printable bounds”.

Fred Pine, the Yousts’ attorney, argued that the charges were hypocritical.  “If they’re going to clean up Miami why is this the only club they pick on? Is it because Al Youst wouldn’t turn rat and save himself by giving false testimony against the sheriff?” – referring to graft charges against the local police. Youst had refused to testify that the police had accepted bribes in exchange for permitting continued operation. The prosecution’s case centered on a $25 check sent to Evelyn’s mother endorsed by Youst and Pine. That and testimony about activities at La Paloma led to guilty verdicts. Evelyn got four years; Al eight.

The club closed down after this arrest. The attorney, Fred Pine, who had worked for Al Capone in 1929, and later been the Dade County solicitor before working for Youst was also convicted on similar charges the next year.

It is said that one of the cops later dated one of the impersonators and escorted her to the annual policeman’s ball – and took her there in a patrol wagon.

The racist term 'white slave traffic act' was used as a nickname for the The Mann Act, 1910, which was "An Act to further regulate interstate and foreign commerce by prohibiting the transportation therein for immoral purposes of women and girls, and for other purposes".   While that wording says nothing about race, the act was use to interfere with with interracial relationships and also premarital and extramarital relationships.   Jack Johnson, the black boxer, was charged in 1912 with violating the Mann Act due to traveling with his white girlfriend, Lucille Cameron, who refused to cooperate with the prosecution and whom he married soon thereafter.  In 1941 Charlie Chaplin ended his affair with Joan Barry and bought her a train ticket to New York.  For this he was charged under the Mann Act. As Wikipedia puts it: "The penalties would be applied to men whether or not the woman involved consented and, if she had consented, the woman could be considered an accessory to the offense".

So the Yousts were convicted in that Youst and Pine had sent bus fare combined with "after-hours activities".   Evelyn would seem to have consented in that she ended up as the boss's wife - although nothing is said about the other four.

So we have the irony that a mixed queer-straight night club was raided for being queer and kept going.   But was finally closed when the boss was convicted of a technical infraction of a law about heterosexuality.

We might also mention the novel The Saint in Miami, 1940 by Leslie Charteris.   On p136, the protagonist goes to a nightclub with the fictional name of Palmleaf Fan which may well be inspired by La Paloma.


"And he realised that there were some things about the clientele of the Palmleaf Fan which were more than somewhat queer.

He wasn’t thinking of the more obvious queernesses, either; although it dawned on him in passing that some of the groups of highly made-up girls who sat at inferior tables with an air of hoping to be invited to better ones were a trifle sinewy in the arms and neck, while on the other hand some of the delicate-featured young men who sat apart from them were too well-developed in the chest for the breadth of their shoulders. Those eccentricities were standard of the honky-tonks of Miami."