Mercer was raised by working-class parents in Preston, Lancashire, and left school at 16 with minimal qualifications to work for a plastering and tiling contractor. Mercer also played rugby and did weight lifting and boxing.

At 17 Mercer spoke to the family doctor about feeling as if in the wrong body but was told “Stop bothering your mother”. The vicar arranged a referral to a psychiatric hospital where Mercer was subjected to ‘five or six’ sessions of electric shock aversion therapy while seeing pictures of women’s clothes. It took 40 years to get over that experience.

Mercer was married at age 19, and they had two children. Voluntary work in a youth club led to training as a primary school teacher, but as there was a shortage of maths teachers, Mercer ended up in a secondary school. By age 26 Mercer was head of mathematics, and did a degree at the Open University followed by a masters in Education Management at Sheffield Hallam University.

Mercer became deputy head, acting head, and then headteacher at a school in Blackpool at the age of 37 and thereby the second youngest headteacher in the country. 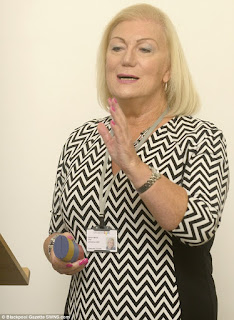 In 1994, Mercer had begun transition by taking estrogen. Word and got around, and a news photographer came to the door and took a photograph that then appeared in the tabloids. Mercer was suspended and investigated for not having “the honesty or integrity to be a headteacher”. However there was no case to answer – but it did intimidate her into having her newly grown breasts removed.

Mercer finally met a supportive psychiatrist in 2000, retired in 2002 at age 55 and this time did complete transition as Carolyn.

Since retirement Carolyn has been a hospice trustee and vice-chair, trustee of a national hospice charity, a member of Lancashire Constabulary Independent Advisory Group and chair of Lancashire LGBT.