Review of two books about Stonewall


While Stonewall was an iconic event for both the trans and the gay movements, the perspectives of the two movements are quite different.   This is shown in the two books here, which, although both of much merit, do mainly reflect the gay perspective, but not the trans. 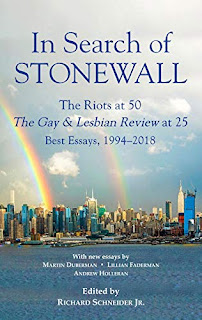 The Gay & Lesbian Review is a bi-monthly magazine out of Boston that publishes much that is worth reading.  I read most issues.   Unlike most gay/lesbian organizations and publications from the 1990s, the G&LR never renamed itself as the LGBTQ Review.   Writing from a trans perspective, it is right that they did not do so, as while it publishes occasional pieces about trans issues, they are usually from a gay and/or lesbian perspective.   Many of the issues that a trans reader would look for have not been tackled, so the magazine name is appropriate.

The book contains various essays previously published in the 25 years of G&LR, with new essays by Martin Duberman, Lillian Faderman and Andrew Holleran, and an introduction by editor Richard Schneider.   The book itself is supplemented by the May-June 2019 issue Stonewall Special.

Schneider writes: ”If nothing else, it is a marker in historical time with a clearly defined ‘before’ and ‘after.’ But to imply that Stonewall interrupted the flow of history, singlehandedly resetting the LGBT calendar, is to pile a lot of responsibility onto a single event or era. Still, something happened, and it happened quite rapidly and even magically after the riots, so in this sense the search for Stonewall can also be a desire to reconnect with the overpowering energy and excitement of this period.”

From this he includes essays about before and after Stonewall, and about elsewhere in the US, although not in Canada nor in Europe.  No one discusses the wave of partial decriminalizations of homosexuality that had swept Europe in the 1960s: 1961 Czechoslovakia, Hungary, 1963 Israel, 1967 England & Wales, 1968 East Germany and Bulgaria, 1969 Canada and West Germany.   In the US, only Illinois and Connecticut followed.   The question of whether the fact that the US had fallen behind other countries contributed to the Stonewall events is not discussed.

Nor are there any essays in the book about how movies, theatre and novels partly prepared the way.  In the few years leading up Stonewall, there were plays by Jackie Curtis, John Vaccaro and Charles Ludlam, films by Andy Milligan, Avery Willard, Jack Smith and Paul Morrissey - not to mention Boys in the Band and Myra Breckinridge. This dificiency is addressed in the May-June issue with a review by Andrew Holleran of Kembrew Mcleod’s The Downtown Pop Underground.

Martin Duberman, in his introduction to Part 1, says:


“A prominent theory about the corrupt Sixth Precinct's uncharacteristic failure to alert Stonewall's Mafia owners to the imminent raid ascribes it to the owners' tardiness in the making their usual payoff. An opposing theory emphasizes instead that the Precinct's new commanding officer was sending a message that henceforth the payoffs had to be higher-or, argues yet another theory, that he was determined to abolish them altogether. And so it goes.”

Surely there should be mention of the theory presented in David Carter’s book that Ed Murphy was running, from Stonewall, a blackmail racket against gay employees in the financial services and that stolen bonds were turning up in Europe.  Having noted that, I also noticed that none of the writers mention Police Inspector Seymour Pine who was in charge of the Stonewall Raid, and also of the raid on the Snake Pit the following March.  Nor are any of the mafia persons mentioned: not Eddy Murphy (who, in addition to working from the Stonewall later founded the Christopher Street Festival committee), nor Michael Umbers, landlord of STAR House, nor Matty Ianiello who co-ordinated the Stonewall for the mafia, and would in 1974 be behind the opening of the Gilded Grape - a new bar for trans women.

There were four activist groups in New York that emerged in the wake of Stonewall: Gay Liberation Front (GLF), Gay Activist Alliance (GAA) the Street Transvestite Action Revolutionaries (STAR) and the Queens’ Liberation Front (QLF).   There is significant mention of the first two.  There is a passing mention of the third, and nothing at all about the fourth.  The mention of STAR names Sylvia Rivera and Marsha P Johnson, and Duberman’s Introduction concedes that she may actually not have been at Stonewall.  But that is all.   Not a word about Tammy Novak. Joe Tish, Candy Darling, Holly Woodlawn, Lee Brewster, Bebe Scarpinato, Jayne County, Allyson Allante, Bubbles Rose Lee, Bunny Eisenhower, Kim Christie, International Chrysis, Siobhan Fredericks, etc.  The only trans woman featured is Major Griffen-Gracy, usually referred to as Miss Major.  Griffen-Gracy is not mentioned in either Duberman’s or Carter’s book on Stonewall, and did not particiapte in GLF, GAA, STAR or QLF.  So to choose her as the one and only trans woman to feature is a very odd choice.

I seem to be mainly listing what the book is not.  Much of it is well-worth reading, but do not expect coverage of the trans content of the Stonewall event. 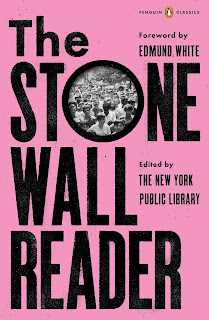 This book is a collection of pertinent documents from the New York Public Library donated by many gay and trans New Yorkers, and as such is invaluable to gay and trans historians. Some of the interviews were previously published in Eric Marcus’ Making Gay History, 1992.

Like the G&LR book, this does before, during and after Stonewall, and spreads out to other cities across the US, but is also totally disinterested in Canada and Europe.

There is much more trans content: Masha P Johnson (twice), Sylvia Rivera, Holly Woodlawn, Jayne County, and again Major Griffin-Gracy.   So the four best known trans women in New Yorks activism and the arts, and Griffin-Gracy who was not in STAR or QLF or in any films, but all the others listed above are again ignored, and in particular there is nothing on the Queens’ Liberation people.  The trans bits are all in the “during” section, with nothing in the “after section” except for the second Masha P Johnson piece which is about STAR.  The “before’ section includes an excerpt from John Rechy’s City of Night, but not the section about Miss Destiny.

There also is an entry from Transvestia in which Virginia Prince discussed being divorced by wife number 1 and marrying wife number 2 – which is rather out of sync with the rest of the book.   Prince was not a gay-libber in any sense.   Not that I want to wall off the FPE-TriEss people from the rest of the trans movement, but surely  - to take a sample from Transvestia - something by Susanna Valenti would be much more suitable, or perhaps an excerpt from Darrell Raynor’s A Year Among the Girls.  Both Susanna and Darrell were, of course, New Yorkers.

This leads to the question: having included material from Transvestia, a Los Angeles trans newsletter, why is there nothing from the New York trans magazines and newsletters: nothing from Turnabout, nothing from Female Mimics, and most importantly, nothing from Drag, A Magazine of Transvestism (which featured writings by Lee Brewster and Bebe Scarpinato and was by far the most radical of the trans periodicals).

This is going to be an issue going forward. It's enough that the POTUS wants trans people to be erased however it's happening in the gay community as well. I refuse to be made invisible.