After working as a teacher and psychologist, he moved to the University of Hong Kong in 1985. He was a lecturer in psychology and then a specialist in cognitive behavioural analysis. He completed his PhD there in 1995.

Shortly after the turn of the century, he became aware of the health needs of trans persons.


“When working in Hong Kong I met a young person who had recently self-identiﬁed as a trans girl. She had been thrown out of the family home by her parents, and could not ﬁnd a job because of her male ID card. She started to use drugs and developed mental health problems. I knew then that I had to change my life to do something to help. I saw the potential of being able to make a big diﬀerence in a new and specialised area.”

He changed his speciality to transgender health, and taught gender and sexuality. He was on the editorial board for the International Journal of Transgenderism, and on the board on WPATH from 2009. He was a co-author of the WPATH Standards of Care 7. He was the only established academic in Asia specializing in transgender issues, and was a founder of the TransgenderAsia site. As it says on the site’s home page:


“Some years ago Sam Winter examined the humanities and social sciences literature on transpeople. Of 235 key publications on transgenderism in the period 1992 to 2002 around 41% were European and 48% were North American, a total of 89% from two parts of the world that account for only 20% of its population. Only seven per cent were from Asia”.

Of particular interest, Winter distributed questionnaires to 195 Thai trans woman and to 147 Filipino trans women. The results were published in 2006-7. In both countries more trans women have college or technical education than the general population, but they are mainly unable to get graduate jobs. They work as show girls, in the hospitality trade, etc or are unemployed. In both countries many trans women expect that by age 50 they will have reverted to living as male, even if they are post-op. Most had started hormones as teenagers, and had surgeries in their twenties. The vast majority, 98% in Thailand, and 95% in the Philippines were androphilic. 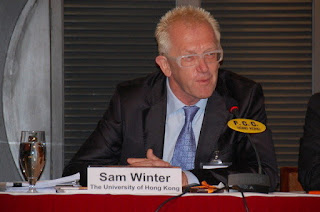 As Winter came up to age 60, it was made clear that his tenure would expire, even though other professors at the same university continued beyond that age. Over 230 students wrote to the Vice Chancellor urging that Dr Winter be retained, and a Change.Org petition to the same effect gained over 800 supporters. However the University insisted that he go, and in 2015 he became Associate Professor in Sexology at Curtin University, Perth, Western Australia.

He leads a small team in sexology, and teaches at undergraduate and masters levels. He has been involved with the World Health Organization working towards the ICD-11 which moves the diagnosis of “gender incongruence” out of the mental health and behavioural disorder section and into sexual health. With Kavan Wylie he was the co-leader of the series of articles in The Lancet in 2017. He has done advocacy work with Asia-Pacific Transgender Network (APTN) and Global Action for Trans* Equality (GATE).
Winter has published many articles and book chapters. Most of them are behind pay walls – see Scholar Google for the list.

Here are some of his articles that are accessible: