How did pink become a girly colour?


Things not mentioned in the video below: 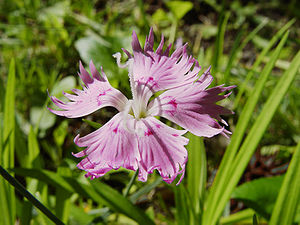 In Dutch pinck means little  (cf pinkie finger).  A variety of the flower genus Dianthus  was called pinck-ooghen (little flower).  This was taken into English in the 1570s as a name for the Dianthus.

From this time pink or pinke was used for being at one's zenith, be it health or accomplishment.  'In the pink' meant strong and healthy, and by the sexist conventions of the time was applied mainly to boys and men.  This was reinforced by Thomas Pink, an 18th-century London tailor who specialised in the scarlet jackets used in fox hunting.  Here is an article from FoxHunting World on whether their jackets are pink, red or scarlet.

"It is the very pink of hideousness and squalid misery"  wrote Charles Dickens in 1845, of an Italian town that he disliked.

"Pure white is used for all babies. Blue is for girls and pink is for boys, when a color is wished."(Ladies’ Home Journal, 1890)

"If you like the color note on the little one’s garments, use pink for the boy and blue for the girl, if you are a follower of convention." (The Sunday Sentinel, March 29, 1914)

"Pink or blue? Which is intended for boys and which for girls? This question comes from one of our readers this month, and the discussion may be of interest to others. There has been a great diversity of opinion on this subject, but the generally accepted rule is pink for the boy and blue for the girl. The reason is that pink being a more decided and stronger color, is more suitable for the boy; while blue, which is more delicate and dainty is prettier for the girl. In later years the shade of pink has been much improved. Perhaps if we had had the delicate ﬂesh tints when baby layettes were ﬁrst sold, the rule might have been reversed. The nursery rhyme of‘‘ Little Boy Blue’’ is responsible for the thought that blue is for boys.  Stationers, too, reverse the colors, but as they sell only announcement cards and baby books, they cannot be considered authorities. If a customer is too fussy on this subject, suggest that she blends the two colors, an effective and pretty custom which originated on the other side, and which after all is the only way of getting the laugh on the stork." (The Infants’ Department, June, 1918, p. 161)


In 1922, Thomas Gainsborough's painting Blue Boy was acquired by the US magnate Henry Edwards Huntington for his art gallery in California.  He paid £182,200 (over £6 million today).  This created a huge outcry in Britain where it was a popular favourite in print reproductions.   Huntington hung the portrait in juxtaposition to Thomas Lawrence's Pinkie, and the two paintings were repeatedly associated.  The paintings were used as set decorations for many episodes of the American television show, Leave It to Beaver, (1957-63) which furthered the association.  This brought the association to those who don't read art criticism. 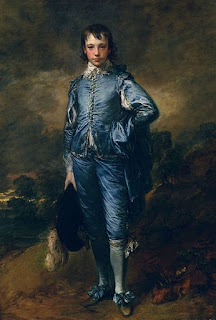 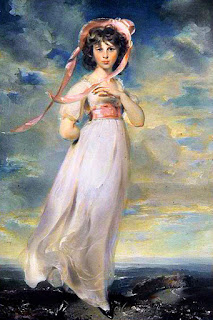 Smocked pink Polly Flinders baby dresses were popular for girls in the 1940s, as little boy blue sailor suits were for boys.

Mid-1980s:  pre-natal testing became available and parents, family and friends bought baby clothes specifically for a boy or a girl, rather than just for a baby.

The Wikipedia article concludes: "The reality is that 'pink for girls, blue for boys' has existed continuously since at least the 1820s, while 'blue for girls, pink for boys' is only recorded between 1889 and 1941."

Marco Del Giudice attempts a case that attraction to blue or pink is somehow biological.   He is what John Money called biological devout.

Even if there was not actually a blue-pink reversal in the 1950s, it being the case that the two systems were in conflict earlier, we are still dealing with a social construction in that the pink for girls was unknown before the 1820s, and that it did not rule unchallenged 1889 to 1941.

The US is the dominant country associated with the colour reversal.  It is also in the US that the red-blue political colours have been reversed.  Red has been associated with socialism and communism since the French Revolution, and now (only in the US) it is the colour of the plutocratic party.  British viewers find it nicely ironic that Trump frequently wears what looks very much like a Labour Party tie.