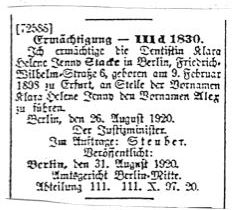 Born as Clara Jenny Starke In Erfurt, Thuringia, Alex, apparently anatomically intersex, moved to Berlin, where he worked as a dentist and, with expert evidence from Magnus Hirschfeld, he applied for a Transvestitenschein (police permission to wear men’s clothing) in September 1919. Hirschfeld had advised that a gender-neutral name like ‘Alex’ was more likely to be accepted. In September 1920, he successfully petitioned a local court in downtown Berlin to change his legal name to Alex, and in November the civil register in Erfurt was accordingly changed. As per usual practice with any name change, he was obliged to pay for announcements in the Deutsche Reichsanzeiger and the Preussische Staatsanzeiger – which in effect outed him.

In 1928 Alex was medically examined twice. The one report said that he had a ‘dual sexuality-bisexuality’ (Doppelgeschlechtigkeit-Bisexualität); the other found him to be female.

In 1930 he wrote an article for Die Freundin magazine about how the then transvestite scene in Berlin was focused on entertainment and did not cater to the needs of actual transvestites.

In September 1939, Alex. petitioned for the birth register to be altered to say that he had been a boy, not a girl. Five months later he gave up this attempt as hopeless, but his file was now on a desk at the supervisor of registry offices (Standesämter).

The Nazi officials who were now running the Standesämter were outraged that such changes of gender were permitted in the Third Reich. They expected the Erfurt Standesamt to rescind the name change, after which the Berlin Transvestitenschein would also be revoked. However a change in the law in 1932 had required an executive decision by the interior administration for such decisions, potentially at ministerial level. Furthermore, from October 1939 all proceedings in change-of-name cases had been suspended for the duration of the war as a labour-saving measure.

The Standesämter persevered, arguing that this was not a private case but a matter of interest to the state. The Interior Ministry issued a ruling in May 1941. They ruled that as Starke had lived as a man since 1920, it would be an ‘unjustifiable hardship’ and maybe even ‘impossible’ for him to have to start living as a woman. The name change was not to be rescinded, however he was not to be allowed to marry.
*Not the 21st century actor