Phillip Forrester was born and raised in Savannah, Georgia. He was in drag at age 5, and as a child sang on Savannah radio.

At Halloween 1953, he and a drag friend got dolled up and crashed a party at a local American legion. Only after several drinks did it come out that they were not cis women. They quickly left but driving home they were followed by two soldiers who shot out a tire on their car, and Forrester was orally raped.


"It was so scary: there's no words for it. But I made a decision that night that I was out. A real weird way to come out, though."

The first public drag performance was at age 18. She was popular with sailors in the port and would perform on ships docked there. Eventually this led to Forrester being discharged from the Georgia Air National Guard, and fired from a secretarial job at the Seaboard Railroad. The Savannah police arrested her several times, once on a drummed-up loitering charge.

It was time to move and she arrived in Atlanta in 1965. At that time she had a husband, and they started a small antiques shop near Peachtree and 11th Streets. That area became ‘the Strip’ where bohemians and gays were to be found.

She dabbled in drag shows using the name Leslie Diamond. Jayne County wrote in her autobiography:


“It was considered a very big deal to go to straight clubs and pass as a woman, and there weren’t many of the queens who could pull it off. One who could was an older queen called Diamond Lil, who was the mother of all the young street queens in Atlanta.”

In 1968 a friend asked Diamond to headline a new drag show at Mrs P’s, a restaurant in the basement of the Ponce de Leon Hotel. There was an arrangement with the police: only on week-nights, and the show was not to be advertised. She took the name Diamond Lil as a last minute inspiration on the opening night. At first she mouthed to Motown records, but started singing with her own voice – one of only a few drag performers to do so.

For six months in 1970 there was a bar called the Club Centaur. Diamond and another drag artist, Phyllis Killer, performed backed by a live band. Diamond became known for her hard-driving rock’n’roll songs. She added in her own songs, and released them on 45s – some of them were played on jukeboxes across the city.

Diamond performed several times for the Georgia Gay Liberation Front. She also wrote, for the alternate weekly, The Great Speckled Bird, the first time after being caught in a police raid on a club in Savannah in 1970.

In 1972 Diamond did a benefit for the Committee on Gay Education at the University of Georgia and sang “Stand by Your Man.” UGA officials did all they could to throw the COGE off campus, but Lil’s support gave COGE financial backing and a public profile.

Diamond started a column in the gay paper, Sunset People, and then in the nightlife magazine, Cruise. 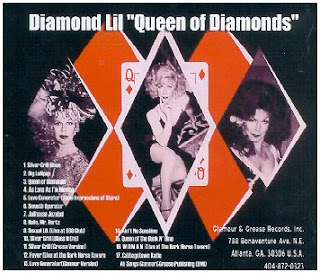 In 1984 Diamond Lil put out a full LP of original material, The Queen of Diamonds/Silver Grill. She was an acknowledged influence on  Lady Bunny and RuPaul who started out in Atlanta at this time. However, by then Diamond was losing her fans to AIDS. There were fewer places to perform, and she reduced her performances and concentrated on a new antiques business. She was writing for the bar magazine Etcetera – these articles were often obituaries.

In the 1990s she had a few revival shows. In 2002 she re-released her album on CD. She put out two more albums: Live at the Moonshadow Saloon, 2004, and Verge, Vigor and Vim, 2007. In 2014 the readers of the Georgia Voice newspaper voted her Best Icon; in 2015 Atlanta Pride and Touching Up Our Roots honored her in the first ever Our Founding Valentines event. After a struggle with cancer, Lil was moved into a hospice. She died age 80. 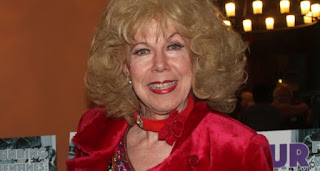 Lady Bunny is quoted in The Atlanta Journal Constitution:

"She was singing with a live band and I had never heard of a drag queen doing that. That really helped shaped my experience because it was not disco music, it was rock 'n' roll and it was original. What always interested me about Diamond Lil, she broke the boundaries of what most drag queens thought they could do. Most thought they could either lip sync or do a celebrity impersonation and she said no, I’m going to front a rock band and do original music...I did love the mock grandeur of her. I totally bought it, when you were in the same room with her, she was regal. She really was magic. She really was unique."


Honora Ornstein, from Austria-Hungary, performed during the Klondike Gold Rush in the 1890s.