Tareq, born and raised in Egypt, was an actor, but felt wrong in the body, so went to Europe for the operation. On return she took the name Hanan Al Tawil, and announced from the stage that she had become a woman.

She was given a small part in the film Abboud Alal Hodood (Abboud on the Borders), directed by Sharif Arafeh. Arafeh then cast her as a school-teacher in Al Nazer (Headmaster). 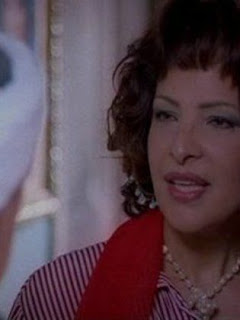 She moved to comedy theatre, and to straight drama. In the play Hakim Uyoon (Ophthalmologist) she was cast as a young wife suffering from a negligent husband. Her family were quite accepting of her new self.

Hanan died at age 38, possibly from suicide. She had been frequently mocked and harassed, and took it badly.

IMDB often becomes quite deficient, the further that it moves from Hollywood.   It lists only one film for Hanan: I Want my Right, 2003.  El Cinema list 6 films.