“Kohler would give the young queens clothing and change, or sometimes pay for a room in a local fleabag hotel; and when out walking his dog, he would sit on a park bench with them and listen to their troubles and dreams. He was able to hear their pain even as he chuckled at their antic. …

Yet for all their wit and style, Kohler never glamorized street queens as heroic deviants pushing against rigid gender categories, self-conscious pioneers of a boundary-free existence. He knew too much about the misery of their lives. He knew a drugged-out queen who fell asleep on a rooftop and lay in the sun so long that she ended up near death with a third-degree burn. He knew ‘cross-eyed Cynthia’, killed when she was pushed out of a window of the St George Hotel in Brooklyn – and another ‘Sylvia’, who jumped off its roof.”

Wallace Hamilton (1919-1983) had an apartment in Greenwich Village where he welcomed many gay persons. In his memoir, Christopher and Gay, he recounts meetings with ‘Wanda’.


“She had brought in the street, the night’s affairs, the reality of the city, and, with a kind of bizarre hyperbole, broke through the shells of private fantasy that had shut the city out. … Wanda was a queen of brash Auntie Mame femininity. Slight, dark-haired, with a chiselled face, she could wear ordinary male clothes and still come on as womanhood personified. She was a queen who didn’t need drag. …

I’d heard about Wanda’s death from someone on Christopher Street early one evening … The story was that he (sic) had fallen or been pushed out of the fifteenth floor of a hotel in Brooklyn. Since he had no identification on him, the body had lain unclaimed in the morgue for several days before any of his friends had been able to trace him down. He had no family in evidence, and was ready for Potter’s field.”

Is ‘Wanda’ the same person as ‘cross-eyed Cynthia’?


Both names seem to be pseudonyms. Hamilton’s account would date the death to 1971. The account in Duberman is placed in the book just before the Stonewall riots, and therefore suggests 1969, but actually the quoted section is a summary of Kohler’s list of street queens that he had known who met unfortunate deaths. Duberman interviewed Kohler many years later for his 1993 book. Thus Cynthia’s death could be in 1971.

Or perhaps more than one street queen was defenestrated from the St George Hotel!

What do we know about the St George Hotel in Brooklyn? 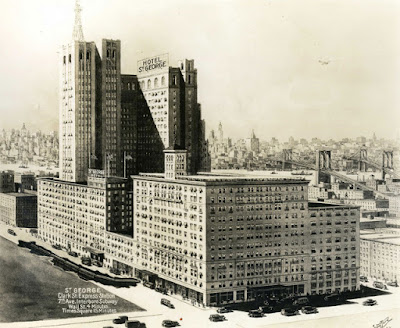 hotel in New York City. It contains the Clark Street subway entrance. It fell into disrepair. By the early 1970s homeless people and AIDS patients were being placed there by city agencies. In 1995 most of the interior was destroyed by a massive fire. Today most of it is student housing.