Rodney Arsenault was raised in a trailer park in Beamesville, Ontario, where he identified with beautiful women. He gained two masters degrees and became an instructor in acting at Toronto’s York University.

Arsenault started having plastic surgery during holiday breaks and reading weeks, and became Nina. At a staff Christmas party, a grad student proclaimed:


“Aren’t you victimizing yourself by constructing your new identity out of the oppressive misogynistic values that you were socialized with as a male?”

Nina conceded the point, but embraced the image anyway.

In 2005, Nina’s talent agent was Eugene Pichler, who was also advocating against funding for transgender surgery at the same time.

After nine years, 60 cosmetic surgeries and $160,000, financed mainly from working in the actual sex trade, working as a cyber-whore, and writing a ‘t-girl’ column in Fab magazine, Nina was chosen for one of eight Unstoppable awards, that year’s theme in the 2007 Toronto Pride Gala. 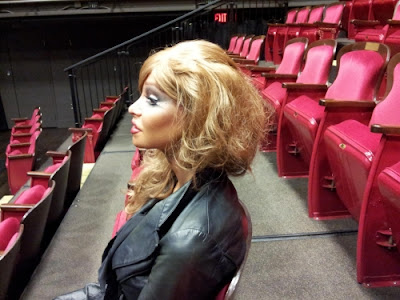 Sky Gilbert, drag queen and playwright, wrote a play, Ladylike, around her persona, and it opened in November 2007. In 2010, she starred in the solo piece, I Was Barbie. In 2012, Nina’s play in seven monologues,  The Silicone Diaries, was professionally produced. She has also done performance pieces in art galleries.

In May 2012, Luka Magnotta murdered Lín Jùn, 林俊, a student at Concordia University, posted videos of the crime online and physically posted body parts to politicians and to schools. He fled to Paris and Berlin, but was arrested, returned to Canada, tried and sentenced to life in prison. His earlier relationship with Nina attracted press attention.

Later that year, the book TRANS(per)FORMING Nina Arsenault: An Unreasonable Body of Work, a series of essays on her work, was published.

In 2013, while on a flight to Edmonton with fellow performer Lexi Sanfino, a flight attendant asked for makeup advice “because you used to be guys, right?” In response, Sanfino decided to strut topless down the aisle. She was arrested when the plane landed, and Nina who filmed the arrest was also arrested, but released without charges. They were addressed as male based on the ‘M’ in their passports, and Nina was questioned about whether she had had genital surgery. They pointed out that it was not illegal for a legal male to remove his top. Lexi was charged with causing a disturbance.