There has been an article “Fifty years on: The Charing Cross Gender Identity Clinic and the funding of a category without parallel” published at Youth Trans Critical Professionals and again at Gender Trender.

The author is given as “Susan Matthews, UK Academic”, but does not list any academic qualifications.

The article gets off to a very bad start with one error after another.


I have already discussed this. Treating intersex patients, the clinic dates from the 1930s, treating transvestites and transsexuals, from the 1950s.


Actually the UCLA GIC was founded by Stoller in 1964.

“The founding clinician at Charing Cross, Richard Green, came with an impressive academic pedigree, having worked with Money, collaborating on research on boys who demonstrated cross-gender behaviour.”


Richard Green was reported to be in London in 1966 and 1969. He very likely visited the existing Charing Cross clinic, but he certainly had no position there. He is not even mentioned in John Randell’s book. Also the Feminine Boy Project was still in the future: it was done in the 1970s.

“Up until the second half of the twentieth century, the word ‘gender’ referred to grammatical gender, a feature of language not human identity.”


Not this canard again! Obviously Matthews does not read 17-19th century novels. Some examples:

George Byron, Don Juan, 1824, having got his protagonist into female dress justifies using female pronouns: 'I say her because,/The gender still was epicene'.

Matthews then writes about John Money, lobotomy, John Money again, Bruce Reimer of course. She does not at all mention the Charing Cross doctors who worked with trans patients in the 1960s, ie. John Randell, Lennox Broster, Peter Philip. Come to that, there is also no mention of a certain Harry Benjamin. For Matthews, it seems, Money alone invented transsexualism!

Matthews writes: “For the Reimer case is open to many different readings. Zoe Playdon attributes the failings of UK gender identity clinics to this history”. This is a remarkable statement in that the details of the Reimer case would not be known for another 20 or 30 years. Certainly there is no mention of it in Randell’s 1973 book.

Matthews seems to think that Money was such an overwhelming influence that Charing Cross followed his lead: “The science of gender emerged from a tiny group centred on John Money and its findings were ethically compromised”. If this were so why cannot it be demonstrated from Randell’s writings?

Here is the bibliography from Randell’s book. 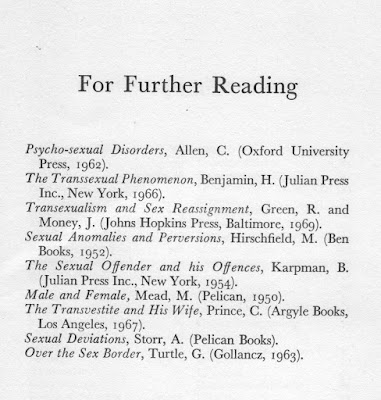 The only mention of Green or Money is the 1969 anthology, which would be included as Randell contributed a paper to it. However none of Money’s or Green’s writings are listed, nor are they in the index, nor are they mentioned in the text.

In the 1960s the UK was less dependent on US fashions. To take two contemporary examples, that is 1965-7, compare the anti-psychiatry of RD Laing to the Scientology fellow-traveller Thomas Szasz, or the radical difference between the psychedelic music of Pink Floyd and Soft Machine from that which came from San Francisco. John Randell, whatever else we may think of his attitude, was his own man, and no-one has argued that he was a disciple of Money.

Having ignored the history of the CXGIC, Matthews jumps quickly to the 21st century, and as proof of Money’s influence she writes: “Echoes of the founding beliefs are still apparent in a 2011 paper by James Barrett, currently lead clinician at Charing Cross GIC. ‘Disorders of gender identity have probably always existed, inside and outside Europe’, Barrett writes, citing a 1975 study (Heiman).”

Heiman is not in her bibliography. Comments about trans people being everywhere are found in every popular survey. May I suggest Oscar Gilbert’s Men in Women's Guise: Some Historical Instances of Female Impersonation, 1926 or many News of the World articles over the decades. To claim this as part of Money’s influence is to show that Matthews does not begin to understand what he had to say.

She spends most of the paper attacking Barrett and the fact that he has said different things at different times. He is wrong when he and other clinicians decide what to do ignoring the patients’ wishes, and he is wrong when he listens to the trans persons who come to the clinic and he accepts their self-diagnosis. “This claim is important, for if trans were a disorder (as in 1966), the work of the clinic would belong in a worrying tradition, one that harks back at the worst to lobotomy and calls up disturbing memories of the treatment of David Reimer. If trans has any links to body dysmorphia, to anorexia, or to self-harm, then it could not be appropriate to medicate or to offer surgery, however acceptable to the patient, however fiercely demanded.”

Having attacked Money for not listening to David Reimer’s self-diagnosis that he was not a woman, Matthews is still not willing to accept the equivalent self-diagnosis of trans persons. She connects trans and trauma: “Perhaps the most important voices are those of transitioners and detransitioners who are now beginning to explore what they see as a relationship between trans and trauma, challenging the constricting logic which demands that the complexity of human experience must fit the constructs of the gender narrative.”

Let us suppose that there is merit in Matthew’s linking of trans and trauma. She undermines her own case by distorting the history of the CXGIC and especially her (how shall we put if) Money-fication of its history and by paying no attention at all to the clinic’s pioneers.
Time: 20:12