Yevgeny Arkhipov, Евгений Архипов, went to dances as a girl, and was able to obtain female hormones. However as there was no medical supervision, illness was induced, and Arkhipov had to stop taking them.

Arkhipov graduated as a lawyer from Voronezh State University in 2004, and married Yulia Guseinova:

From 2004-6 Arkhipov was Head of the Legal Department of the Public Chamber of the Voronezh region, and from 2006 Chair of the Association of Russian Lawyers for Human Rights. Arkhipov was also the director of the watchdog Anti-Corruption Committee to which people could report abuses of office.

In 2008, while preparing to publish a report on corruption, Arkhipov and other members of the group were forced to flee to the Ukraine for two months where they released their findings.

In 2009, Arkhipov was the lawyer for Sergei Magnitsky, accountant, auditor and whistle-blower who was murdered in custody.

After being an organizer for a rally opposing toll roads that the local population had voted down overwhelmingly, Arkhipov faced a loss of status as a lawyer on the pretence that lawyers have no right to engage in social activism. At only one day's notice he was required to attend the qualifications commission of the Moscow City Bar. However charges were later dropped.

After an assassination attempt in June, Arkhipov temporarily left the country.

In 2010 Arkhipov spoke out against the blocking of websites run by the National Bolshevik Party. Shortly afterwards Arkhipov fell ill, and after a few days was taken to Moscow Hospital. Doctors confirmed that the symptoms indicated a toxin such as thallium, which is often used for murder. However at 22:30 the same day he was ordered to leave the hospital.

Arkhipov did live and worked on some of the most high profile and politically sensitive cases in Russia: young men accused of taking part in a violent nationalist rally on Manezh Square in 2010; helping defend protesters charged with violence at the 2012 opposition rally on Bolotnaya Ploshchad; and the so-called Primorye partisans, which targeted corrupt police in the Far East.

Arkhipov was the lawyer for Aleksandr Dolmatov of The Other Russia Party (successor to the National Bolshevik Party). Dolmatov fled to the Netherlands where he was refused political asylum, and was driven to suicide when put in a deportation centre, a placement which Arkhipov strongly criticized.

In particular Arkhipov defended trans activist Roman Sorokin, Роман Сорокин, in 2013. The Federal'naya sluzhba bezopasnosti (FSB) threatened closure of the Association of Russian Lawyers for Human Rights. While in custody, Roman was interrogated for everything he knew about Arkhipov, whose home was searched in August 2013 by the FSB and two other civil activists detained. Sorokin was out of Russia at that point and in response began applying for political refugee status in France.

By this time Arkhipov's cases had come to a temporary end, and time was found to attend to personal matters. It was also a time when legal and social conditions for all LGBT persons in Russia were worsening: in particular the Anti-Gay Propaganda Law was passed in 2013. Despite this, a press release prepared by Yulia Guseinova publicly announced that her spouse, previously known as Yevgeny Arkhipov, would now be living as a woman, Masha Bast.


"At least 10 percent of people I know don't want anything to do with me anymore. 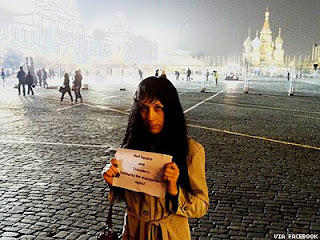 Everyone else keeps in touch and calls me Masha now. Some people who you would have thought would've supported me based on their views haven't, and some nationalists, who based on theirs you wouldn't have expected to, have".

"What is bravery? Because I came out? I wasn't trying to prove that I was brave. It was my choice. I'm a free person. Bravery and freedom are one and the same in my case. You have to be brave to be free. The freer a person is, the braver they have to be."

In September, Masha attempted to join the recently formed Western Choice Party, but was rejected. In October she held a picket on Red Square to memorialize the Yekaterinburg trans government employee, Dasha Shtern, who committed suicide after being fired because her continuing employment might break the new anti-gay propaganda laws.

Masha Bast continues as an activist for civil rights, feminism, LGBT rights and for a left-wing Russian party. She is still the chair of the Association of Russian Lawyers for Human Rights, and they are also monitoring the treatment of Victor Bout, a Russian political prisoner in the US prison system.

The two books published in 2014 refer to Bast only as Yevgeny Arkhipov.   However, given the pace of book publication, they were probably written before Masha came out in 2013.

In a time when the word 'hero' is being applied to persons who have done nothing out of the ordinary, Masha is the real thing.
Time: 09:16