Emilie Paule Marie Violette Morris was born into a family with military connections on her father's side back to the Revolution.

Her paternal grandfather was Louis Michel Morris (1803–1867), a cavalry officer who rose to General for his part in the French conquest of Algeria, and was made a grand officer in the Légion d'honneur. He married a Jewess from the Algerian city of Constantine after already having three children with her. Altogether they had two daughters and three sons:

Paul Louis Morris (1846-1901) who like his father became a General and a chevalier in the Légion d'honneur;

Jacques Pierre Morris (1849-1918) who also was a cavalry officer, mainly serving in the colonies, but never rising above the rank of Captain. He was a prisoner-of-war during the Franco-Prussian War of 1870, and later suffered from what might have been epilepsy, as well as from yellow fever. He was also cautioned and served 30 days hard labour for gambling. In 1888 he was put on sick leave, and effectively retired. In 1889 he married the 20-year younger Elisabeth Sakakini (of the prominent Levantine family) in Belgium. Elizabeth brought a significant dowry to supplement Jacques' army pension.

Their first child, Paul, died in his first year. They then had two daughters: Louise (1891-1986) and then Violette. Both daughters were educated at the 12th-century convent Abbaye de Solières close to Huy in Belgium by English nuns.

Even as a teenager Violette was a notable pugilist, and also outstanding in swimming, cycling and water polo. In 1913 Morris came 5th in the 8 km French swimming contest – she was the only female competitor. 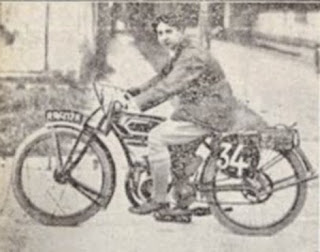 The next year, three weeks after war was declared, Violette married Cyprien Gouraud (1886-?) the son of a paper maker. Three days later he was mobilized. In 1915 she joined the Red Cross, and later was a motorcyclist for them. However she came down with bronchitis and pleurisy and was six months in hospital.

In 1917 La Morris returned to championship athletics and set the first French record in shot put. Both her parents died in 1918, and shortly afterwards Morris started to wear male clothing, using the excuse that it was her wartime uniform. She never applied for a permission de travestissement.

Her inheritance provided a living, and gave her time to train. That year she also played in the first official women's football match in France. In goal, she played with her head bare (as men did) rather than wearing the prescribed beret. In 1919 she was admitted to the Fédération française de sports féminins (FFSF), and participated in the first Women's World Games in Monte Carlo in 1921 establishing new records for shot-put and javelin. In 1922, at the second female olympics she set records in athletics, and came second in 1,000 m swimming, and won a cycling race. She also took up motor racing, and, the only woman entered, came 4th in the Bol d'Or.

Cyprien and Violette were divorced in May 1923, and he remarried in October. She opened a car/motorbike accessories shop, Spécialités Violette Morris, at 6, rue Roger-Bacon, using the inheritance from her mother. The rent was 8,000 francs per annum, and the 41,000 franc valuation was all in the stock. She lived in the flat upstairs.

Morris was temporarily suspended for giving performance-enhancing drugs to her football team, for questioning the referees and for doing nothing when the referee was hit by a member of her team. In 1926 Morris was indefinitely suspended from football. She used her name to recruit female athletes for a film. She refused to transfer her licence to another club.

In 1927 the FFSF notified Morris that she was suspended for these violations, and for wearing male clothes. Her smoking and drinking did not help. The FFSF also banned shorts that were too short, playing without a bra, and costumes that were too tight.

A journalist from Paris Midi who questioned Morris apropos the new regulations thought that he must be meeting her husband or brother, "mais non, c'était bien elle, en chair plus qu'en os, habillée d'un complet veston, avec pantalon - comme vous et moi, monsieur - faux col et cravate (but no, it was her in the flesh, dressed in a full jacket with trousers - like you and me, sir - collar and tie)".

Morris attended a meeting of the FFSF, and issued a defense of her dress style: "L'habit masculin n'a, à ce que je sache, rien de malséant. J'y suis tenue de par mes obligations professionnelles et tant que les lois de la République française ne m'en empêcheront pas, rien ni personne ne peuvent m'interdire un costume qui, vous en conviendrez, est toujours décent (There is nothing, to my knowledge, unseemly about male clothing. I am bound by my professional obligations and by the laws of the French Republic, but they do not prevent me, nothing and nobody can forbid me to dress in a way that you will agree, is still decent)". However this argument did not convince, and Morris was expelled from the FFSF, and thereby from all French championships and the French team for the Olympics where she was expected to win gold medals.

The 1928 Olympics were held in Amsterdam, although only a few women's events were included; Morris was not on the French team.

In 1929 Morris went further, and using the excuse of fitting into a racing car, publicly had a double mastectomy (what today we would call top surgery) at the clinic of Dr. Cazalis in the suburb of La Garenne-Colombes.

Morris sued the FFSF for reinstatement and 100,000 francs in damages. While her case was against the arbitrary use of power, the trial focused on the right to wear male clothing. Her male lawyer defended the inherent decency of trousers, and questioned why trousers had been okay with the FFSF for ten years, but no longer. He contrasted Morris with Victor Barker in England who had attempted to pass as male. The FFSF had two female lawyers, one of whom, Yvonne Netter, was a noted feminist, divorced and an advocate of planned parenthood. They explained that because of their responsibility to the government (which provided grants) and to parents, they must set good examples. Morris was accused of cross-dressing to attract attention. They noted how female clothing had evolved from the long skirts and corsets of the pre-war era. They portrayed Morris as being a moral danger in female locker rooms, and criticized her in that she had never applied for a permission de travestissement. Morris' lawyer produced a letter from the Commissioner of Police giving assurance that they no longer pursued women in trousers.

EN.WIKIPEDIA says that Violette was "the youngest of six sisters", which is definitely wrong.

Several of the men in the Morris dynasty were named Jacques, and they usually anglicized it to James. However there is no indication of any relationship to the Somerset/Welsh James Morris who transitioned to become Jan.

FR.WIKIPEDIA, as do most of the books, has Violette Morris as the winner of the 1927 Bol d'Or driving a Benjamin.

However the FR.WIKIPEDIA article on Bol d'Or lists the 1927 winner as "Lempereur" driving an FN. No first name is available for this mysterious winner who otherwise is unknown to history. 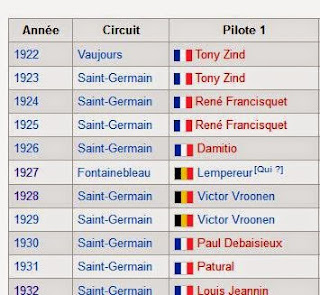 Did Morris and the very young Robert Cowell ever drive in the same race? Cowell did drive in the 1939 Grand Prix in Antwerp, but Morris, then 46, was no longer driving.

Almost all writers accept Morris' explanation that racing car cockpits were so tight that breasts got in the way. The transsexual perspective is that this was merely an excuse. See the photograph above of Morris in a Benjamin. It does not at all look cramped.

Like Madeleine Pelletier, we have somebody who looks, walks and talks like a trans man (and in Morris' case has had top surgery), but does not take a male name.   Morris does not attempt to pass as does Victor Barker in England, but she was already famous from her sporting achievements and thus passing was not really an option.

Morris did not care to use her first name Emilie, which she shared with her aunt, the wife of Paul Louis. The name she used, Violette, has connotations in that 'viol' means 'rape' (compare the English 'violate') and was associated with lesbians in early 20th century France in that several were Violettes: Violette Leduc, Violet Paget (who used the pseudonym Vernon Lee), Violette Murat, Violet Trefusis, Vivienne Renée wrote of her unrequited love for Violet Shillito. There was also the convicted non-lesbian parricide, Violette Nozière (who had been violated by her father).

What do the Wikipedia authors think that they are doing? While accepting that Morris was a life-long male-dresser who had her breasts removed, both FR.WIKIPEDIA and its almost copy EN.WIKIPEDIA choose to include a frontal photograph of Morris the swimmer that emphasises her then more than ample breasts, and a photograph of her in women's clothes – in effect in drag. There is no shortage of Morris in her preferred male clothes. So what is Wikipedia doing?

As with Madeleine Pelletier, Halberstam's Female Masculinity has nothing to say about Violette Morris. Likewise the lesbian cross-dressing set of Anglo-American expatriates that included Natalie Barney and Gertrude Stein, although they did invite a few token French women: Collette and Mathilde de Morney, did not invite Violette despite her prestigious lineage. (Obviously Pelletier was not invited for, despite being a doctor, she was a child from the slums).
Time: 09:38