Chandra Prakash was born to the Brahmin family of a superintendent of police. However the child was discarded and handed over to hijras to be raised. She had only two years of schooling, but speaks 12 languages.

Taking the name Shabnam Bano, she acted in small parts in Hindi films, and later became a social worker.

Shabnam was elected to the Madhya Pradesh assembly in the Sohagpur constituency, and served from 1998 to 2003. In retrospect, Bano was known for her lack of corruption, although initially no other assemblyman would sit next to her. 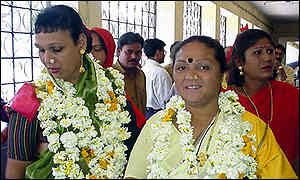 A film has been made based on her life.

She is often addressed as Mausi (Hindi for Aunty), and has become an inspiration to other Hijra to take up mainstream activities
EN.WIKIPEDIA
Time: 09:03