Halberstam's grandfather was the Rabbi in the town of Most in the Sudetenland. He died of a heart attack in 1936.   After the Nazi occupation, it was permitted that some Jewish children be allowed to leave without their parents.  The Rabbi's widow put their child Heini on a Kindertransport train to London in 1939.  She herself was later deported to a Nazi work camp, where she died.

Encouraged by his English foster parents, Heini pursued his education and did a PhD in mathematics at the University of London. He specialised in the distribution of prime numbers, and taught at Trinity College Dublin 1962-4, and the University of Nottingham 1964-80. He and his wife, Heather had four children, of whom Judith was the second. Heather died in a car accident in 1971.

Judith was frequently taken to be a boy:


"Nearly every day. I didn't go around correcting people. … [I] just though I was a boy. I thought that eventually somebody would figure that out." (Gambone: 139)

This created problems with school classmates. She kept her hair as short as possible and fell into the punk rock scene.

Heini Halberstam took a position as head of the Mathematics Department at the University of Illinois, Urbana-Champaign in 1980 and emigrated with his second wife. Judith followed, and ended up in the San Francisco area:


"the New Agey, leftover stuff from the hippie era and the intense focus on gay men, was so not my scene" (Gambone:141).

But she did find and appreciate the dyke-bar scene. On a whim she applied to the University of California at Berkeley and was accepted. She earned a BA in English at in 1985. She followed this with an MA, 1989, and PhD, 1991, at the University of Minnesota. In Minneapolis she found a vibrant butch-femme scene.


"I suddenly got what I thought my role was. I could be queer, interested in women and masculine. The word 'butch' was a lifesaver. Even though 'butch' was already being vilified by the feminists, I took it up anyway because there was no other term"(Gambone:141).


"The difference between me and a trans man is not much. I just never pursued the surgery and the hormones." (Gambone:141)

Halberstam's thesis was Parasites and perverts: anti-Semitism and sexuality in nineteenth-century gothic fiction, and she found a position as Assistant Professor of English at the University of California, San Diego, and became the film reviewer for Girlfriends magazine.

In 1994 she contributed an essay "F2M: The Making of Female Masculinity" to Laura L. Doan's anthology, The Lesbian Postmodern, which contains the paragraph:


"We are all transsexuals except that the referent of the trans becomes less and less clear (and more and more queer). We are all cross-dressers but where are we crossing from and to what? There is no 'other side' , no 'opposite' sex, no natural divide to be spanned by surgery, by disguise, by passing. We all pass or we don't, we all wear our drag, and we all derive a different degree of pleasure – sexual or otherwise – from our costumes. It is just that for some of us our costumes are made of fabric or material, while for others they are made of skin; for some an outfit can be changed; for others skin must be resewn. There are no transsexuals."(Doan:212)

The article was criticized by trans men who insisted on the difference between themselves and butches who were women, and many butches wanted to deny that difference in order to suggest that there exists an element of choice in relation to the question of whether or not to transition. Jamison 'James' Green, the editor of FTM Newsletter, took Halberstam to task for speaking for trans men, and a writer, Isabella, suggested that Halberstam was a lesbian feminist who wanted transsexuals to disappear within a postmodern proliferation of queer identities.


"I took this criticism very seriously, if only because I had been trying to do the very opposite of what she accused me of doing." (p147)

Jordy Jones, the performance artist, supported Halberstam in the newsletter pointing out that transsexual experience cannot be represented in any one totalizing or universal way.

In 1995 Halberstam temporarily left UCSD to do a postdoctoral fellowship at New York University, and a visiting professorship of gay and lesbian studies at Yale.

Her first book was Skin shows: gothic horror and the technology of monsters, which does a queer reading of gothic fiction and horror movies, and posits post-human bodies. The latter idea was further explored in the anthology Posthuman bodies, which she co-edited.

The same year she and Jenni Olson created a documentary, Looking Butch: A Rough Guide to Butches on Film, a compilation of images of butch women from the earliest days of Hollywood, including tomboys from the '60s and recent transgender FTMs. And asked why are they less common now that we have a lesbian cinema?

By 1998 she was able to publish the seminal Female Masculinity, which gained two Lambda Book Award nominations. Halberstam is open about her own masculinity, and introduces her other persona, Jack. She asks about female-born persons who are not really lesbian or trans:

"female-born people who think of themselves as masculine but not necessarily male and certainly not female". (Gambone:142) 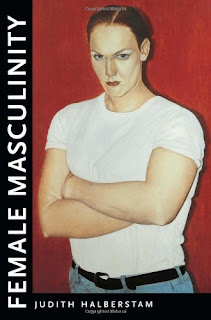 It also considers the border wars between butch and FTM, and butches in films. As Adams says in her review of the book:


"One valuable lesson of Halberstam’s work is that granting white men ownership of masculinity has elided more progressive versions of the masculine and has enabled the condemnation of female masculinity by both straight and lesbian feminists". (p468) "Drawing examples from the early nineteenth century through the ﬁrst decades of the twentieth, Halberstam demonstrates the unacknowledged contribution of female masculinity to modern understandings of masculinity. Moreover, she shows how previous scholarship, eager to secure the historical foundations of lesbianism, has oversimpliﬁed, misunderstood, or elided a wide range of gender-deviant behaviors." (p469)