Shan Ratnam was of Ceylonese Tamil descent, and was born in Jaffna where his mother came from, although his father's family had lived in Malaysia for three generations. From the age of six months he lived in Kuala Lumpur.

Ratnam's father was ordered to be beheaded by the occupying Japanese in 1942, but was saved by a Japanese woman married to an Indian man. His mother died at age 38 during the Occupation from rectum cancer, as did his youngest sibling from tuberculosis meningitis. This inspired him to become a doctor.

In 1969 Ratnam was pestered by Shonna who was desirous to have sex change surgery. He became intrigued by the possibility, read the literature and finally practised the operation on two cadavers in the mortuary. He had Shonna evaluated by a team of psychiatrists who confirmed that she was indeed transsexual. Legal clearance was sought from the ministry of health and granted. Surgery was performed 30 July 1971 at the Kandang Kerbau Hospital 竹脚妇幼医院. This was the first such operation in east Asia.

A Gender Identity Clinic was set up headed by Prof Ratnam, who ran it until his retirement in 1995, when it was passed to his nephew, Dr. Anandakumar. In 30 years more than 300 sex change operations were performed.

In 1972 Ratnam's gynaecology department was recognized by the World Health Organization as one of 13 outstanding research centres in human reproduction.

In 1974 Dr Ratnam, his assistant Dr Lim and several of his then patients were featured in the documentary Shocking Asia.

In 1983 Ratnam did the first Asian In-vitro fertilization. In 1987 the first Asian live birth from a frozen embryo. In 1989 the world's first live birth after microinjection, and in 1991 the world's first infant born via human ampullary coculture. He published 596 research papers in internationally refereed journals, 396 in local and regional refereed journals, 138 chapters in books and 795 presentations at conferences. In 1996, Ratnam was appointed as Emeritus Professor. In 2000, the Shan S. Ratnam Professorship endowment was set up to award internationally recognised O& G specialists annually. 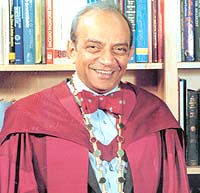 He developed heart complications and died of pneumonia at the age of 73.

After his death the Gender identity Clinic was quietly closed on the excuse that the gynaecologist in charge had left for private practice. The Ministry of Health had been pushing for closure for some years. However petitions from the trans community supported by local media resulted in the Clinic re-opening in 2003.