Simone dressed and lived as female from age 18. She was contingently accepted for surgery but told that she must work for a year as a woman first. She managed to obtain work as a secretary/personal assistant in the Department of Health of the House of Representatives, the Parliament for coloured South Africans in the Apartheid system, while being open about her past.

However, a year later, the surgery program had been suspended. Simone ended up waiting ten further years. Then using her contacts she heard that the program at Groote Schuur Hospital, Cape Town (where Christiaan Barnard had performed the first heart transplant in 1967) had been revived and they were doing operations again. Transgender operations had been done, on and off, at Groote Schuur since 1970 but ironically were discontinued after the end of Apartheid, as was state funding for the operation. Simone, one of the last to have the operation there, was approved in 1994 for state funding but her insurance company stepped in once assured that the operation was medical and not cosmetic. She told her then boss that she was having gender surgery and he thought that that meant that she would become a man.

Simone's elder sister Tammy was also trans but died of AIDS before she could have surgery – 23 days before Simone had her second-stage surgery.

Even after surgery, the embedded gender number range in her National ID number kept outing her to banks and government bureaucracies. Working with the Gender Research Unit at the University of the Witwatersrand in Johannesburg, and with the nerve to make an appointment with the Attorney General himself, Simone was able to threaten to go to the Constitutional Court. The Department of of Justice and the Department of Home Affairs agreed to change her ID book and even her ID number as a one-off. 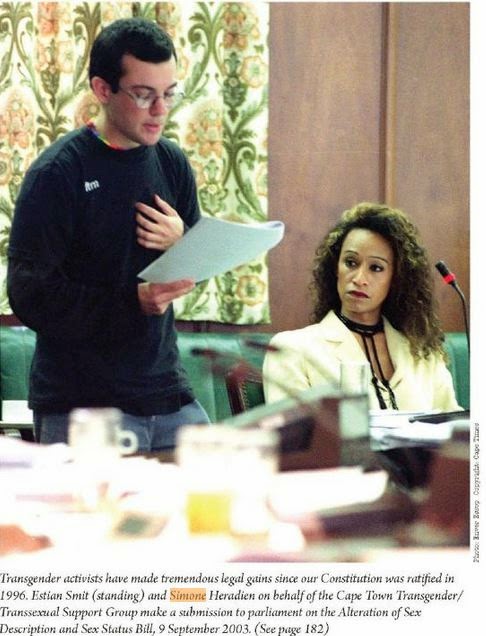 Simone found a boyfriend who was quite accepting of her past, and they were engaged. However he had a history of depression, and hanged himself in March 2003.

Simone had been working with the Triangle Project, a trans support group in the Western Cape at that time. On the Internet she discovered that the National Assembly was discussing an Alteration of Sex Description Bill. With Estian Smit and Sally Gross (an intersex person), also of the Triangle Project, they prepared a submission to the Assembly committee – even though they had only three weeks to do so. Simone was given three weeks off work to attend portfolio committee after committee. Against opposition from established gay and lesbian organizations, they formed the independent Cape Town Transsexual/Transgender Support Group to lobby that surgery not be a requirement and that provision be made for intersex persons.


"Refusing to legally recognize a transsexual person’s reassigned sex serves no purpose. It impedes their ability to live and work in their new gender, in accordance with their medically prescribed treatment. Being able to obtain correct identity documentation is the key to equal participation in employment and educational opportunities for a transsexual person. Rather than erecting additional barriers in the path of transsexual people, the law should encourage and support their successful adjustment by providing them with the legal recognition necessary to be productive members of society."

The resulting Alteration of Sex Description and Sex Status Act 2003 was voted for by the ruling African National Congress and most opposition parties with the conspicuous exception of the Christian Democratic Party.