Ramirez was a Catholic alter boy, and initially wanted to be a priest. But being gay did not become so.

She was a sex worker in Los Angeles under the name Lolita, and then was working towards transgender surgery as Nicole. However she realized that she was not a female trapped in a male body, and became a drag queen instead. While hooking in San Diego she was picked up by a serial killer who had killed hookers and trans women, and was left for dead, and escaped only in that she was on Quaaludes.

Most of her boyfriends were marines who were bottoms. Ramirez changed his legal name to Nicole even though he did not proceed to a gender change.

In 1972 Nicole organized a successful boycott of local bars that refuse to admit trans women.

In 1974 he founded Teddy Roosevelt Republican Club, and his drag persona, the Empress of the Imperial Court de San Diego, rode in San Diego’s first Pride parade in an open vehicle amid jeers from hostile spectators. He was among the few to take the microphone and speak at the rally in the park immediately following. Regarding that day he said:


“It was a scary and lonely march down Broadway … nobody applauded. And most gay people didn’t come out to the sidelines because they were afraid". 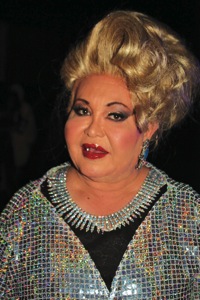 In 1977 he was active against Anita Bryant-led Save Our Children which was really an attempt to reverse gay rights to non-discrimination, and in 1978 against the Briggs Initiative in California which would have banned gay and lesbian teachers, and was a friend and co-activist with Harvey Milk before his assassination in 1978.

Nicole knew Andrew Cunanan who went on a murder spree in 1997, and is quoted in most accounts of the spree.

In 1993 Nicole was on the national executive and emcee for the April 26 gay and lesbian March on Washington. In 1998 he was co-chair of National Latino/a Lesbian and Gay Organization.

In 2007 at a Coronation Ball in Seattle, on Feb. 17, José Sarria formally handed leadership of the Imperial Court System over to Nicole, and she assumed the title “Queen Mother of the Americas”.

In 2010 Nicole completed an unprecedented 4th one-year term as chair of San Diego Human Right Commission. He has also been a national board member of the Harvey Milk Foundation, and has served a four year term on the board of the National Gay and Lesbian Task Force.

He has a column in the San Diego LGBT Weekly.
IMPERIAL COURT TRANS HEROES.

The Wikipedia article on Nicole says that he was born in 1921, which would make him 91 years old, and also that he was 40+ going on 50 when he was a trans sex worker in Los Angeles. If so he must have a youth elixar to stay so young.
Time: 21:24