Diane Baransky apparently had surgery at the Johns Hopkins Gender Identity Clinic in 1963.  Her brief moment of fame was in February 1967 when she and John Money were interviewed by Alvin Davis on the CBC program This Hour Has Seven Days.  Her purpose was to demonstrate how convincing as a woman a transsexual could be.  It was not stated whether she were Canadian, or whether she had come from the US with John Money.

As John Colapinto summarizes her appearance: 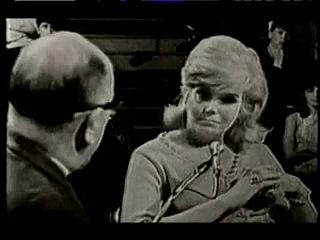 ‘At this point the camera cut from Dr, Money and his questioner to a a blond women who walked out onto the set.  Dressed in a narrow skirt, high heels, and a matching close-fitting jacket, she took a seat in the chair across from the two men.  A close-up shot revealed that her round, pretty face was expertly made up, in the style of the mid-1960s, with heavy eyeliner, mascara, and foundation, her mouth thickly painted with lipstick.

“This is Mrs. Diane Baransky,” the show’s announcer said.  “Until four years ago, her name was Richard.” …

Now she was accepted as a woman and had recently married her husband, a fellow hairdresser. ‘

There are a couple of problems with this account.  The standard account is the first transsexual to have surgery at Johns Hopkins was Phyllis Wilson in 1966, and in February 1967, Johns Hopkins was claiming to have done only two such surgeries.  From the ‘four years ago’ it is implicit that she transitioned in 1963.  However transition may take some years.  It is possible that Diane was the second patient after Phyllis in late 1966, or that she had gone to Europe or Morocco like so many transsexuals at that time.  The account in Colapinto’s book does not clarify the issue.

The second problem is that according to Colapinto the CBC program was This Hour Has Seven Days.  According to CBC Archives page This Hour Has Seven Days was a satirical news program, and most importantly, it ran from October 1964 to May 1966.  That it, it was no longer being broadcast in February 1967. Nor is there an Alvin Davis listed as one of its interviewers.  Very likely Mr and Mrs Reimer mis-remembered the name of the program – that is very easy to do. Again Colapinto’s account does not clarify the issue.   However the BBC documentaries were able to find the relevant clip, but do not give the broadcast details.

“Diane Baransky” was probably, according to the customs of the time, a pseudonym.  Certainly the one woman of that name who is found in a Google search is too young to be the same person.  Like Agnes, who was in the news a few years earlier, she successfully managed to stay out of the news for the rest of her life.
Time: 17:59